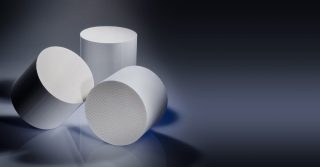 A 54-year veteran of the company, Dr. George Beall is a Corporate Fellow in Corning’s Research Group. Throughout his career, he has been granted more than 100 U.S. patents and was the first Corning employee to achieve this milestone. Listed below is some information on his life before Corning and some of his career highlights to date. 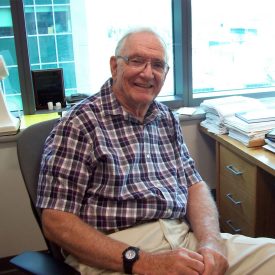 Life before Corning
George grew up in Montreal, Canada. His passion for geology was prompted in his freshman year at McGill University in 1952 in a geology course that encompassed the earth and the solar system, taught by the legendary geology professor, Thomas H. Clark. “It was the spontaneous and exciting lecturing style on phenomena like earthquakes, volcanoes, fossils, minerals, and continental drift that sparked my interest and imagination,” George said.

For seven summers during his college years, George worked for Shell Oil doing geological mapping work in very remote places in the Canadian Rockies, and for the Quebec Department of Mines, making geological maps of the wilds of northern Canada. In 1958, during one of these trips, George and a colleague were in a helicopter crash near the edge of a cliff.

“The pilot misjudged a sloping area as flat, and fortunately, the mast of the helicopter went into a crevice, stopping the aircraft from rolling further,” George said. “We were able to get out as the pilot released our safety belts while we were hanging upside down just above the ground.”

After safely getting out of the plane, George and his colleague returned to their camp via a nine-mile walk. “We continued with our geological mapping work that summer after a new pilot and helicopter were brought in.”

George received his bachelor’s degree in geology in 1956 from McGill University and went on further to earn his Ph.D. in the same field of study at the Massachusetts Institute of Technology (MIT) in 1962. His original intention was to become an earth science professor. However, this idea never materialized after a proposed teaching assignment at MIT on the mineralogy of meteorites was canceled when the lead professor decided to take a position elsewhere.

How he came to Corning
George was introduced to the Corning Central Falls (R.I.) plant manager by his wife-to-be, Janet, who worked at the plant in 1962. Following this meeting, George had additional interviews within Corning, and was excited when he was offered a job as a research geologist/mineralogist working under Dr. S. Donald Stookey, the inventor of glass-ceramics, later that year. Prior to starting with Corning, he had minimal prior knowledge of glass and ceramics as his experience focused on the chemistry of natural rocks. The only glass he was familiar with was volcanic glass.

“At first, I was unsure of how a geologist could relate to Corning’s products, but I shortly came to find there are actually many applications for someone with my background."  - Dr. George Beall 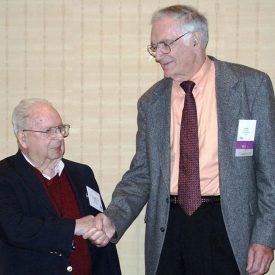 His first assignment at Corning was to find a way to remove the yellow-brown color and purple haze from existing transparent glass-ceramic percolators. He did this by applying his geological knowledge and newly acquired insight from Don Stookey to successfully produce a transparent and colorless lithium aluminosilicate glass-ceramic in 1963. George and Don also became great friends and over time, teamed up on several research projects, and enjoyed many outdoor fishing trips together. “Don was a great visionary in materials science, but he was most proud of product successes like CorningWare® that produced hundreds of jobs,” George said. “He remained humble, despite his successes, and treated everyone he met with respect and dignity. Don was also great role model for me - both personally and professionally.”

Career Highlights
Throughout his career, George has worked on a variety of successful innovations including: the discovery of glass-ceramic materials used in Corning products such as Macor® machineable glass-ceramics, Pyroceram® commercial tableware, Visions® cookware and environmental products. He attributes the success of these products, among others during the early to mid-1970’s to former research director Dr. Bill Armistead. “He increased Corning’s focus on exploratory research and encouraged the cross-pollination of staff groups working together on common objectives,” George said.

Recently, Dr. Beall is proud of the work that he collaborated with other teammates on in relation to glass-ceramics for the consumer electronics market. “The work in this area surprised me because despite extensive knowledge in strengthening techniques, we needed to shift our focus to meet a customer’s need for materials with a special toughness against fracture,” he said. “One of the ways that Corning is unique is that we often go back to older technologies to help us with new ones.”

George has always enjoyed the variety of the products and projects he’s worked on at Corning. “The excitement of my job has always been trying to find a solution to a challenge or customer request using a new material or process,” he said. “As a scientist, no two days are ever the same and -- it’s never been boring.”

Advice for Researchers
Dr. Beall formally retired in 2002 but still works as a contractor on a variety of projects within the glass research group. In addition, he’s currently a mentor to many scientists at Sullivan Park. He reminds scientists that experimentation is important and that disappointments are a part of research. “We can’t force nature to do the impossible, but we must be able to use our imaginations and be creative in order to achieve success.”