Working to strengthen the future of the U.S. glass industry, Corning invites applicants from the academic community each year for a six-month sabbatical at the company's Sullivan Park Research Center. 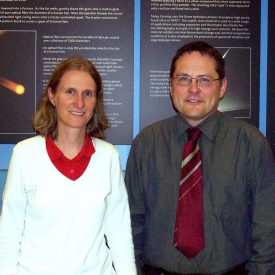 Phil and Anita both work in the Physics Department at the University of Bath in the United Kingdom and, as the second Fulcher sabbatical winners, will be working within the Glass Research Group during their time at Corning.

The sabbatical program was named after Dr. Gordon Scott Fulcher, a Corning glass and ceramic scientist from 1920 until 1934. Dr. Fulcher was best known for the creation of the transformative three-parameter model of viscosity known as the "Fulcher equation.”

“We are delighted to welcome Phil and Anita to Corning,” said Dr. John Mauro, senior research manager of Glass Research at Corning.

“They bring extensive experience in understanding structure-property relationships for a wide variety of glass compositions of interest to Corning and are particularly adept at connecting fundamental science to practical problems of technological interest.”

During their sabbatical, Phil and Anita will be focused on understanding the impact of pressure on glass structure and the mechanical behavior of glass among other glass research topics. “I look forward to working on cutting-edge projects that require a multidisciplinary approach at the interface between basic science and technology,” Phil said.

Anita is also excited about the opportunity to meet and collaborate with new colleagues throughout the sabbatical. “It’s great to work in an environment where everybody you meet is an expert on glass, and can help with difficult questions about the preparation, characterization and properties of these fascinating materials,” Anita said.

The inaugural Fulcher sabbatical scholars Professors Liping Huang and Yunfeng Shi of Rensselaer Polytechnic Institute spoke at Corning's 2016 Glass Summit about their experience at Corning as the first participants in the program.

“Corning is a place where anything can happen with glass research,” said Professor Huang. “If we continue to work together – both industry and academia – we’ll help to advance the future of glass science.”

“While Corning has many working relationships with universities around the globe, this program offers the sabbatical winners and Corning a unique opportunity,“ said Ellen Kosik Williams, university collaborations manager & research associate. “Since the scholars are here for an extended period of time, they’re able to really learn about innovation at Corning and can offer a different and valuable perspective to our researchers as well.” 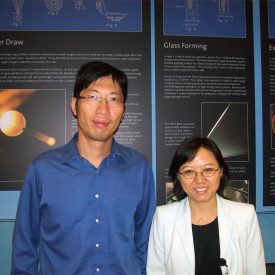 The company took a major step toward that goal this month as two professors from Rensselaer Polytechnic Institute began six-month sabbaticals at Sullivan Park's Research and Development facility in Erwin, N.Y. This is the first time Corning has designed a sabbatical program and invited applicants from the academic community. It is also one of the first U.S. programs specifically focused on glass research.

This is the first time Corning has designed a sabbatical program and invited applicants from the academic community.