A Steady View of A Brighter,
Cleaner Future

A Steady View of A Brighter,
Cleaner Future

Corning innovation has been at the center of dramatic air cleanup since sweeping U.S. legislation in 1970 – and that’s a big part of why our air is cleaner today.

Most adults think about what they want to leave behind for their grandchildren.

At Corning, innovative breakthroughs of a half-century ago are ensuring something we won’t leave them: Dirty, toxic air.

The seeds of that promise began in 1970, when the United States government announced the Clean Air Act. The legislation strictly limited emissions from both industrial sources and vehicles on the road. To be compliant, automakers needed a way to dramatically reduce pollutants from their new models. That’s when Corning created a ceramic honeycomb structure that became the standard for clean-air technologies in vehicles over the world. And we’ve never stopped improving it.

Over the years, Corning continued to envision cities without the heavy clouds of sulfur dioxide and carbon monoxide that had blanketed them for decades. We envisioned a future generation with healthier lungs and stronger hearts.

As a result of that commitment, ceramic substrates and particulate filters from Corning have prevented more than 4 billion tons of hydrocarbons, 4 billion tons of nitrogen oxides, and 40 billion tons of carbon monoxide from entering the atmosphere. It all started with a pressing problem and a long-term approach to solve it.

Decades of industrial growth and new cars on the road – hallmarks of mid-20th-century prosperity – created blankets of smog over cities in the U.S. and other developed countries during the 1950s and 60s. In late 1952, the Great Smog of London was responsible for as many as 6,000 deaths over the course of just five days. More deadly smog episodes would continue to hit New York and London over the years that followed. And Los Angeles freeways became synonymous with thick clouds of choking air.[1][2]

The United States government had made several attempts to regulate sources of air pollution, but legislation lacked the teeth to make a difference.

But in addition to the Clean Air Act of 1970, the new Environmental Protection Agency (EPA) had the mandate to enforce new standards.

That same year, the first Earth Day celebration firmly linked the public’s demand for a healthier, more sustainable environment with the governmental commitment to clean air.

Impressed by Corning’s ingenuity in material science, auto industry leaders encouraged the company in 1970 to begin working on a ceramic substrate for a new device – the catalytic converter. As part of the Clean Air Act of 1970, the converter would be required equipment for all vehicles by 1975.

By 1971, Corning scientists devised an affordable ceramic formula with very high thermal shock resistance and excellent stability in the face of high temperatures and chemical coatings. What’s more, they created a brass die to extrude the material into a honeycomb-like component with about 200 tubular channels, or cells, per square inch. The cell walls were only about 0.3 millimeters thick and could be coated with the chemicals that would neutralize, or catalyze, the harmful gaseous pollutants in the engine exhaust.

Ford Motor Company placed its first order for Corning® Celcor® substrates in late 1971. Within the next couple of years, Corning’s innovation would become the standard for vehicle engines everywhere.

Even then, Corning anticipated that air-quality regulations would require more and more of vehicle manufacturers. Over the years, the company continued to develop its material and processing technology. A steady stream of new substrates featured higher cell densities, thinner walls, and higher porosities that would allow the cordierite substrate to heat up and activate the catalysts more effectively.

In the 2000s, Corning used a similar honeycomb platform to make filters that trap harmful particulate matter, the result of incompletely combusted fuel in diesel engines. Other innovations, like Corning® DuraTrap® GC filters, have helped makers of gasoline direct injection engines dramatically lower particulate matter in their exhaust as well.

Today, ceramic-based mobile emissions control products like those from Corning help save as many as 160,000 lives each year. They also help prevent just as many cases of heart disease and asthma.[3] And from the time catalytic converters became mainstream in 1975 through today, light- and heavy-duty vehicle emissions have dropped by an astounding 99%.

This reduction in vehicle-borne pollutants has been the largest single contributor to the improvement of ambient air quality in the U.S. The nation’s economy has grown fourfold since the U.S. adopted the Clean Air Act of 1970, but at the same time ambient air pollution has dropped more than 70%. 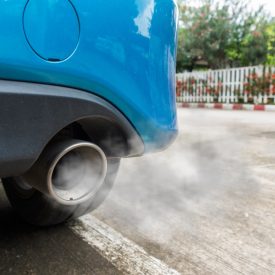 Clean air regulations becoming more stringent every few years. Europe regulators joined the U.S. in tightening exhaust restrictions in the 1990s. In more recent years, China and India have also addressed their significant pollution problems with aggressive air-quality mandates. In every region, Corning has been a key partner in designing emissions-control products to making air cleaner and healthier.

Although air quality has become much better over the past 50 years, there is still significant room for improvement, particularly in the areas of nitrogen oxide pollutants and fine particulate emissions. Additionally, many forecasts suggest that vehicle usage will increase by as much as 50% over the next 20 years, mostly in heavily populated and developing countries. The overall global trend continues to indicate ongoing tightened standards for vehicular emissions.

Knowing now that the typical drive cycle produces most harmful emissions in the first minutes of operation, Corning has become a leader in developing new technology for zero-emission internal combustion vehicles.

And we continue to develop more ceramic processes, materials, and designs -- so future generations will have the cleanest vehicles and best air quality we can imagine today.

More on Sustainability at Corning

Innovating for the WHERE

Innovating for the WHO

Innovating for the HOW