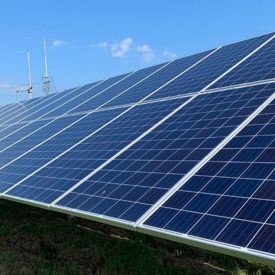 The Oneonta array will help contribute clean electricity to the community.

What do Corning, Starbucks, Apple, Google, and Home Depot all have in common? They are all top corporate users of solar energy in the United States.

According to the latest annual edition of the Solar Means Business report published by the Solar Energy Industries Association, a national trade association, the U.S. has reached 8,000 megawatts of installed commercial solar capacity across 38,000 projects. This report tracked both on-site and off-site solar installation projects in all 50 states for 2019.

In 2019, Corning Life Sciences significantly contributed to Corning’s expanded use of renewable energy by adding solar panels to three of its global facilities.

CLS facilities in Wujiang, China, and Amsterdam, Netherlands transformed their roofs into solar hot spots by installing thousands of solar panels. In total, both the Amsterdam and Wuijang facilities will together prevent more than 1,000 tons of greenhouse gas emissions annually.

In the United States, the CLS Oneonta facility opened Corning’s first solar array in the state of New York. The energy produced from this solar array goes directly into the New York State Electric and Gas (NYSEG) grid and is distributed to local consumers, including the CLS Oneonta plant. The Oneonta array will help avoid more than 600 tons of greenhouse gases annually, which is the same amount of energy it takes to power 67 homes per year.

“Since 2014, Corning has implemented renewable energy projects across 16 of our sites worldwide,” said Patrick Jackson, director, Global Energy Management. “We will continue to look for new opportunities to reduce Corning’s carbon footprint and support our commitment to live sustainably and to protect the environment.”