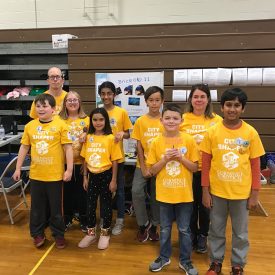 The FIRST LEGO® League (FLL) program is made up of students ages 9-12 who build robots to complete tasks in competitions. The theme of this year’s FLL challenge was City Shapers, where in addition to building a robot out of LEGO products and programing it to autonomously run missions, the students had to design a project to improve their community. The FLL Brickollo 11 team of Corning, New York, chose to focus on improving their school’s energy efficiency.

JT Hufnagel, operations manager, GEM, met with the students from the Brickollo 11 team to teach them about Corning’s sustainability and GEM programs and brainstorm ways to make their schools more eco-friendly. Ideas and conversation topics included implementing a recycling and compost program, installing solar panels, and conducting an ENERGY STAR® Treasure Hunt to identify areas to improve energy and water efficiency.

The Brickollo 11 team used what they learned from GEM about renewable energy and took it one step further to create their invention. The team proposed creating lunar panels to utilize the amount of natural energy being produced by the Earth.

“Instead of only being able to get electricity from the sun, lunar panels would fill the gap and produce energy at night,” said Julia Ahrens, 4th grader, Chemung Valley Montessori school. “By having solar and lunar panels on the school’s roof we can get 24 hours’ worth of energy.”

The Brickollo team was one of 16 teams that competed from the Twin Tiers area of New York. The students recently presented their plan at a competition at the Corning-Painted Post Middle School and were judged on core values, robot design, and robot performance. This was the first year competing for many of the students on the Brickollo 11 team and while they did not advance, they look forward to improving next year. Five Corning-area teams will advance on to Rochester, New York, for the next round of the FLL competition.

“The local FIRST LEGO League challenges students to think like scientists and engineers to solve real-world problems such as improving a building’s energy efficiency. It’s excellent to have students engaged in sustainability and caring for the environment at such a young age,” said Hufnagel.