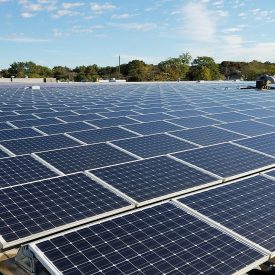 The Corning plant in Vineland, New Jersey, has a rooftop solar array covering about 11 acres over five buildings.

A look at Corning's solar panel installations, in celebration of Solar Appreciation Day

Corning Incorporated’s announcement in March of a solar power collaboration with a customer in Taiwan is just the latest development of renewable energy initiatives at the company.

“Not only is solar energy cost-effective, it greatly reduces our carbon footprint to help our environment,” said Patrick Jackson, director, Global Energy Management (GEM). “We hope to help make Corning a trendsetter among manufacturing companies turning to renewable energy.”

Since 2014, Corning plants have been installing solar panels of their own or entering into power purchase agreements (PPAs) with solar developers to purchase clean energy. These initiatives are supported by Corning’s Global Energy Management (GEM) and Corporate Environmental Control (CEC) teams.

In celebration of Solar Appreciation Day on March 9, GEM details some of Corning’s solar projects, including one of the world’s largest rooftop arrays, and the largest solar field in the eastern United States.

One of Corning’s significant solar energy milestones came in late 2015, with its agreement to purchase the majority of the energy produced at the largest solar field east of the Mississippi River in the U.S.

"Corning is committed to reducing its carbon footprint, and this is a major step in that direction," said Jeff Evenson, senior vice president, chief strategy officer, at the time of the agreement. “Going green makes good business sense because it encourages efficiencies and clean power usage that eventually lowers costs.”

Corning struck the pact with Duke Energy Renewables, which owns and operates the array in Conetoe, North Carolina. At the time, the field was the largest east of the Mississippi River.

Starting in early 2016, Corning has purchased 62.5 percent of the output of the facility, equivalent to the power used by approximately 10,000 U.S. homes annually. The clean energy purchased matches and offsets the power output of Corning’s Display Technologies plant in Harrodsburg, Kentucky.

Corning has hosted one of the world’s largest rooftop solar arrays since 2015, when it acquired the former Gerresheimer Glass facility in Vineland, New Jersey, now a Corning Pharmaceutical Technologies plant. According to David Watson, division controller, Corning Pharma-Glass (CPG), the panels make up the 12th largest rooftop solar array in the world.

“The main reasons we went for solar power were threefold: reduce our carbon footprint, secure stable long term pricing for electricity, and be able to re-roof the facility,” said Watson.

The panels were installed in 2012, and are owned and operated by a solar developer. The installation consists of 11,300 panels totaling about 2.8 megawatts (MW), and covers 11 acres atop five buildings. The system reduces the Vineland plant’s carbon footprint by approximately 1,350 tons of carbon dioxide (CO2) annually, equivalent to the emissions of about 290 cars driven for a year.

The plant’s lobby includes a real-time tracking system, so employees and visitors can see how much power is being produced and the carbon emissions being offset by the panels at any given time.

The Optical Fiber plant in Pune, India, was the first Corning location to utilize solar energy, when panels were installed on the roof in 2014.

The Pune team followed up with two more phases of solar installation. In 2016, another array was constructed on the roof of a horseshoe-shaped car park. In addition to capturing the sun’s rays to power a portion of the plant, the structure also protects up to 60 cars beneath from the hot Indian sun.

The same year, the Pune team installed additional solar panels on the plant’s roof and surrounding grounds. Together, the installations at the plant are producing about 1,100 kilowatts (kW) of energy, enough to power more than 1,000 homes in India for year.

“On average, we get more than 300 days of good solar radiation per year as compared to a colder country where solar systems have made economic sense,” said Apoorva Amin, site energy manager at the Pune plant.

"When we started looking at this, we got really excited,” said Foster, adding that the system is saving a significant amount in energy costs. “It was something new, and we wanted to challenge ourselves.”

The solar panels at the Environmental Technologies plant in Port Elizabeth, South Africa, are unique in that they don't generate electric power, but rather help heat water to be used around the plant.

The panels, installed in 2017, direct the sun's heat onto tubes carrying water to a hot water heater. The process decreases the amount of energy required to heat the water, which is used in sinks around the facility, as well in the cafeteria for cooking and washing dishes.

"There is a major drive in South Africa to reduce consumption of natural resources and reduce pollution," said Peter Rademeyer, site energy manager at the plant. "This is a step in doing our part."

The collaboration announced in early 2018 with a customer in Taiwan, AU Optronics (AUO), meant the installation of solar panels on the roofs of Corning Display Technologies plants in both Taichung and Tainan, Taiwan.

AUO will rent the roof space from Corning and sell the power generated back to Taiwan Power Company, a state-owned electricity utility. The arrays will produce the energy equivalent to the power needs of about 1,000 Taiwanese homes.

It’s estimated that the solar power generation at the two plants will reduce CO2 emissions by more than 2,375 metric tons per year.

The future of solar energy at Corning looks bright, as several other facility teams are working to install solar panels or enter into PPAs, and many more are in the early phases of exploring their options.

“We have several plans in the works,” said Jackson. “Solar energy just makes sense for Corning. GEM is proud of our teams who have taken on these initiatives at their plants, and we look forward to helping Corning use more renewable energy to ensure a cleaner environment.”