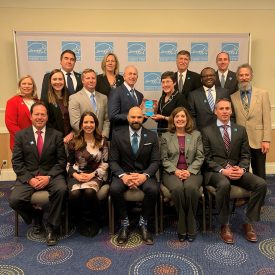 Corning’s commitment to energy management has once again been recognized by the Environmental Protection Agency (EPA). Last week, members of Corning’s Global Energy Management (GEM) team picked up the company’s sixth ENERGY STAR® Partner of the Year Award from the EPA at a ceremony in Washington, D.C.

The award is also Corning’s fourth consecutive Sustained Excellence designation, reserved for companies achieving Partner of the Year status several years in a row, and making continued improvements to its energy management programs. Only a handful of manufacturing companies maintain Sustained Excellence status.

“It’s an honor to have the EPA recognize the hard work of Corning employees committed to reducing our energy consumption year after year. ENERGY STAR has been excellent in connecting us to resources and networks to improve our energy management programs at Corning,” said Patrick Jackson, director, GEM.

Some key accomplishments that led to Corning’s sixth Partner of the Year award include:

“Corning’s successes in energy and water management have truly been a worldwide team effort. While this award is from a U.S. agency, it’s our GEM leaders around the world who have continued to come up with innovative new ways for Corning to be better users of our environmental resources,” said JT Hufnagel, operations manager, GEM.

Corning launched its GEM program in 2006 to create and execute effective energy strategies. Today, the program has grown to include teams at every Corning facility around the world that implement energy- and water-saving projects, such as integrating water recycling systems, recycling heat generated by equipment, installing LED lights, and utilizing solar panels. These efforts have improved Corning’s energy productivity (the energy output per unit of production) by 35 percent and resulted in savings of more than half a billion dollars since 2006.

“The GEM team continues to strive towards excellence in energy management, with its sixth consecutive ENERGY STAR Partner of the Year award.  I am very proud of the team and the efforts across all sites and businesses globally,” said John Novotny, Director of Corporate Environmental Control, Capital Project Management, Global Energy Management.