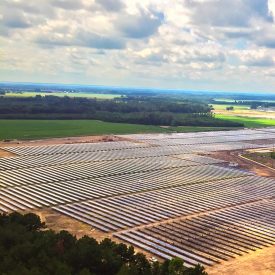 In late 2015, Corning reached a 25-year power purchase agreement (PPA) with Duke Energy to purchase 62 percent of the output of this solar farm located in Conetoe, North Carolina.

GEM’s 2014 goal aimed to improve Corning’s energy performance by 15 percent by the year 2020, an effort projected to save $25 million per year in energy costs. Corning’s strategic energy management actions have exceeded that target, saving an average of more than $30 million per year, or a total of $122 million since 2014.

“Meeting this goal not only showcases our commitment to corporate responsibility, but it also decreases our energy spend to positively impact our bottom line,” said Lisa Ferrero, Senior Vice President and Chief Administrative Officer. “Such sustainable business practices have helped keep Corning operating efficiently for the past 166 years and will help us remain competitive for the next 166 years.”

In addition to exceeding its energy cost reduction goal, Corning has made significant improvements in other areas of energy performance by reducing both greenhouse gas emissions and the amount of energy used per unit of production.

The overall goal was established in 2014 as part of Corning’s participation in the former Clinton Global Initiative, which invited businesses, agencies, and organizations to make commitments based on global issues. Corning’s commitment fell under the area of “Climate Change,” which focused on reducing greenhouse gas emissions. Since 2014, Corning has reduced its greenhouse gas emissions per unit of production by more than 19 percent, surpassing its goal three years early.

“We’re extremely proud that we’ve exceeded our goal twofold,” said Patrick Jackson, director, GEM. “Not only did we greatly improve our energy performance and exceed our financial target, but achieved it more than three years early. This is a direct product of the hard work and dedication from our energy teams at every Corning facility around the world. They see the environmental and financial benefits of saving energy, and have successfully integrated energy conservation into facilities management, process innovation, research and development, procurement of supplies and equipment, and many other areas.”

Corning launched its GEM program in 2006 to create and execute effective energy strategies. Since then, the program and its site teams have improved energy productivity by 36 percent, saving Corning more than $490 million in energy costs. In the past year alone, GEM helped Corning achieve a nearly 7 percent improvement in energy productivity, equivalent to the annual power use of 15,981 U.S. homes.

In 2015 Corning entered into 25-year power purchase agreement (PPA) with Duke Energy. Corning committed to purchasing 62 percent of the output of a solar farm located in Conetoe, North Carolina, the largest solar farm east of the Mississippi River. That amount of electricity is equivalent to the annual power used by approximately 10,000 U.S. homes.

These combined efforts have earned Corning four consecutive ENERGY STAR® Partner of the Year awards, the U.S. Environmental Protection Agency’s most prestigious recognition. In addition, 10 Corning facilities have individually achieved the ENERGY STAR® Challenge for Industry by improving energy productivity by more than 10 percent in less than five years.

“We’re elated to announce our energy performance improvement and related financial achievements on World Energy Conservation Day, an awareness movement celebrated every December 14,” Patrick said. “It’s our hope to inspire others to conserve energy at both work and home, and that these efforts will help make our communities healthier and cleaner for future generations.”