The Silent Spread of the Coronavirus Pandemic: Understanding Asymptomatic Transmission 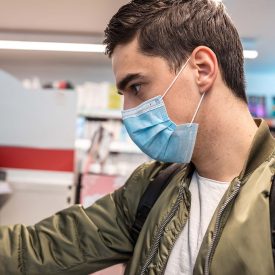 On April 3, the Centers for Disease Control and Prevention (CDC) recommended that Americans — healthy or otherwise — wear cloth or fabric face coverings when they go into public spaces to help prevent the spread of COVID-19 during the coronavirus pandemic.

The announcement reversed the CDC's original guidance on face masks. Before April 3, the CDC recommended masks only for people who showed symptoms of COVID-19 or took care of someone who did, according to Live Science. That guidance was based on the best available evidence, which suggested that healthy people could not contract the coronavirus without exposure to someone who had. But recent studies, according to the CDC, have shown that asymptomatic people can spread the virus. In a March 31 interview with NPR, CDC director Robert Redfield said that as many as 1 in 4 people who have COVID-19 are asymptomatic.

Asymptomatic transmission has helped the novel coronavirus spread throughout the country, according to Redfield, putting hundreds of thousands of lives at stake. Preventive measures — such as face masks, hand hygiene, and social distancing — matter now more than ever.

Here are some tips to help you protect yourself, the people around you, and your workplace from the dangers of asymptomatic spread.

Working in the lab during the COVID-19 pandemic? Watch this short video for tips to keep you and your colleagues safe.

The Role of Asymptomatic Transmission

Though COVID-19 seems to pose a greater threat to older people, the disease doesn't discriminate between ages. Some people who are young and presumably healthy who have contracted COVID-19 have said they've never felt sicker, reports Today. Alternatively, others who have contracted the novel coronavirus don't get so much as a cough, according to Cleveland Clinic.

Even if they follow social distancing guidelines, asymptomatic carriers still run the risk of spreading the virus. Because asymptomatic carriers don't appear to be sick, they're not likely to get tested. If they don't get tested, their cases go undocumented. And undocumented cases, according to a study published in Science magazine, can increase exposure to a virus. Case in point: About 86 percent of novel coronavirus infections that emerged in Wuhan, China, went undocumented, and undocumented infections were the infection source for 79 percent of documented cases.

On the Diamond Princess cruise ship, which had a COVID-19 outbreak in early February, about 18 percent of the ship's 700 positive cases never showed symptoms, Nature reports. Some experts think that the asymptomatic rate in the general population could far exceed the 18 percent rate seen on the Diamond Princess; one epidemiologist estimated that up to 50 percent of people who develop COVID-19 may never exhibit symptoms, according to Nature.

Presymptomatic transmission — in which the virus spreads before symptoms appear — is prevalent and problematic, as seen in the Diamond Princess cruise case. But there's a benefit — however unfortunate it might be — that comes with getting sick and getting tested. If you test positive for COVID-19, it may be possible for you to trace contacts and alert the people you've been in contact with so that they can self-quarantine.

By contrast, asymptomatic transmission lets the virus spread quickly throughout communities. And people who think they're asymptomatic may not be. Patients or even doctors might write off coronavirus symptoms if they are not the normal respiratory clues of dry cough, fever, and shortness of breath. These irregular symptoms — such as digestive issues, malaise, fatigue, and neurological issues, according to Vox — can point toward other conditions, such as stomach flu, or could just seem like the result of a long, hard day at work.

Viral Load and the Makings of a Pandemic

According to studies published in The Lancet, much of COVID-19's spread and severity could be tied to viral load — how much virus a person is carrying in their body and releasing into their environment.

According to correspondence from the New England Journal of Medicine, the viral load of the new coronavirus is similar in symptomatic and asymptomatic patients. That's what makes the current coronavirus pandemic so dangerous compared to other coronaviruses, such as SARS and MERS. According to Infection Control Today, SARS and MERS typically see lower levels of asymptomatic transmission and carry a lighter viral load, which might have helped stall infection rates, comparatively. Due to its viral load profile and because asymptomatic carriers can transmit it, the novel coronavirus can spread faster and more effectively.

Asymptomatic transmission has always played a role in how diseases spread. Many sexually transmitted infections, such as HIV and HPV, have no initial obvious signs or symptoms, the Mayo Clinic notes, but they're still transferable.

Social factors also play a role. The absence of symptoms can lead people to let their guard down and engage in activities that could jeopardize their health — say, relaxing social distancing standards, in the case of COVID-19. Worse still, it could render some safeguards inadequate. For example, workplaces provide temperature checks to employees when reporting to work, as in the case of Walmart and Amazon, according to CNBC, but an asymptomatic carrier won't present with a fever.

Steps to Help Protect Your Lab from Asymptomatic Transmission

The key to prevention is diligence, even if you feel fine. Because asymptomatic transmission poses an unseen threat, caution is key, inside and outside the lab. There are several steps you can take to mitigate the risk outlined by the CDC:

Proximity can be a dangerous impetus for viral spread, according to the CDC, and in small labs, there can be a lot of people sharing limited space. Know where your lab colleagues are, respect their personal space and your own, and diligently do your part to help prevent the spread of the novel coronavirus.

Corning Life Sciences is fully committed to serving our customers across the life sciences industry, particularly at a time when the work being done by many researchers is critical to the management of the COVID-19 pandemic. Read about our COVID-19 resources.