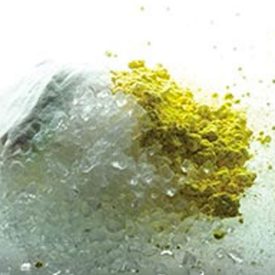 Oxides – the chemical compounds that make up glass – represent most fundamental of chemical pairings:  at least one oxygen atom with one other element.

And the vast majority of glass compositions depend on an oxide called silica, which bonds two oxygen atoms with one of pure silicon. The combination is a powerful one for many glass compositions, because the more silica a glass contains, the lower its thermal expansion and the higher its resistance to heat shock.

The Corning Museum of Glass has unraveled some of the mysteries of silicon, silica, and other compounds with similar names but highly distinct functions. Learn more here.