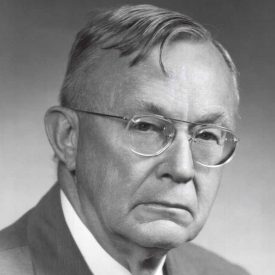 Dr. Jesse T. Littleton joined Corning in 1913 as the company’s first physicist at the newly organized research laboratories at the invitation of Dr. Eugene Sullivan.

Dr. Littleton’s investigations into the physical properties of Corning’s new borosilicate glasses led to their use as kitchenware and, subsequently, a wide variety of industrial glass products marketed as Pyrex. One of the most treasured anecdotes in Corning’s history – how his wife Bessie baked a cake in a cut off Nonex battery jar – marked the birth of what would eventually become the Pyrex bakeware brand.

Dr. Littleton served as chief of Corning’s Physical Laboratory from 1920 until 1940, when he was named Assistant Director of Research. Research by Dr. Littleton and his associates led to the discovery of the immense intrinsic strength of glass.  His procedure for measurement of fundamental glass properties became the world standard.  Under his leadership Corning invented the air tempering and chemical strengthening processes that created super strong glass for many applications.

Dr. Littleton’s legacy embraces the “all hands” collaborative approach to innovation, a tradition that thrives at Corning. As one of the founding scientists of the laboratory, he molded the research method into a positive and productive experience.