Ishak received an honorary Doctor of Science (D.Sc.) Degree from his alma mater, which is the highest honor bestowed by the University.

Ishak received an honorary Doctor of Science (D.Sc.) Degree from his alma mater, which is the highest honor bestowed by the University.

Innovation in the fast lane

Corning and Merck are two years into joint effort to make best use of data science, one of the hottest fields in research today. 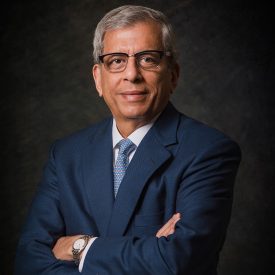 “The degree is the highest honor bestowed by the University,” said Dr. Ishwar K. Puri, Dean of the Faculty of Engineering and Professor of Mechanical Engineering at McMaster. Waguih obtained his M.S. and Ph.D., both in electrical engineering, from McMaster in 1975 and 1978 respectively.

“It is one of the top engineering schools in the world,” said Ishak. “I chose to attend the University – over various other institutions offering me scholarships at the time – due to the relationship I formed with my Ph.D. advisor. He took the time to connect with me, understand my interest, and share research that excited me.”

Waguih’s nomination came from Dean Puri, and McMaster's Board of Directors approved the distinction. “The degree is a mark of Dr. Ishak’s distinguished career,” said Puri. “He is an internationally recognized innovator whose track record is preceded only by the community he inspires.” 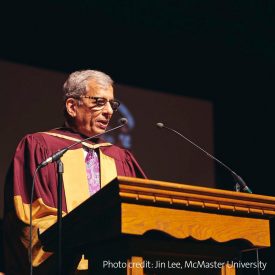 Ishwar described Waguih as an, “inordinately humble person” – a notion emphasized by the fact that Waguih did not see this as a possibility. “I missed the original email from President Deane,” Ishak described. “I later received a call from the President’s Chief of Staff, who was wondering if I planned to accept the degree. I did not expect this.”

At the ceremony, McMaster University President, Dr. Patrick Deane, introduced Waguih with an overview of his extensive career accomplishments and presented him to Chancellor Suzanne Labarge who conferred the Doctor of Science Degree.

Waguih urged the graduates to recognize the significance of their time and to consider the impact they will have on the future of technology. “You should feel excited because you are graduating during an incredible era of exponential growth in technology. 3D printing, autonomous cars, artificial intelligence, virtual reality, augmented reality, and maybe one-day, real reality!”

In his final notes, Waguih touched on a few life lessons his first supervisor gave him on Friday, December 1, 1978, while starting at HP Laboratories. “When you join an industry, start building your network. Find out who is who in your company, in your industry, and around the world. Be a person of interest. Be positive and celebrate the opportunity to create great solutions to challenging problems.”

Dr. Waguih Ishak joined Corning in 2007 and in May 2016 was appointed division vice president & chief technologist, responsible for strategic connections to Silicon Valley hotspots, VCs, startups, and academia. Waguih has authored approximately 100 journal and conference papers, and four chapters in the “Handbook of Electronic Instruments.” He has been named an inventor on seven U.S. patents. He was a member of the National Academics Committee on “Harnessing the Light” and a contributing author of “Optics & Photonics – Essential Technologies for Our Nation,” in 2013, resulting in the White House announcement of the Integrated Photonics Manufacturing Institute on October 2014. In 2016, Waguih became a member of the Visiting Committee on Advanced Technologies (VCAT) of the National Institute of Standards and Technology.

In acknowledging this honor for Waguih and for Corning, Chief Technology Officer David Morse remarked: “We are delighted when one of our own innovation leaders is recognized with the highest honor bestowed by a leading academic institution – the Honorary Doctor of Science Degree. It certainly recognizes Waguih’s extensive technical and leadership accomplishments over the course of his career. It was an exceptional moment in 2007, when Waguih and I agreed that it would be a great opportunity to join Corning’s Science & Technology organization. That certainly has proven to be true!”