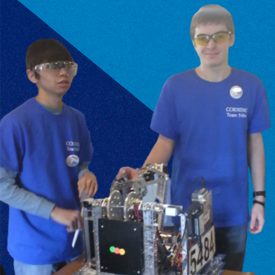 “We joined the Robotics Program in middle school, and now we develop life-changing products and innovations at Corning.”

The duo began in the FIRST Lego League (FLL) – a dedicated setting at the robotics center where those entering the program gained the opportunity to leverage their passion into something beyond the average build.

The two stayed with the program into high school with the FIRST Tech Challenge Program (FTC) where they learned more of the skills that they use in technical settings today.

“The program challenged me to think on my feet,” Sam said. “You couldn’t count on everything going as planned in competitions – robots tended to break or malfunction. I needed to adapt and handle the situation in a collective manner, which is something I still value. Projects at Corning can take different directions that weren’t expected from the start. In a professional setting, it’s valuable for me to have this skillset from robotics that I can leverage on a regular basis.” 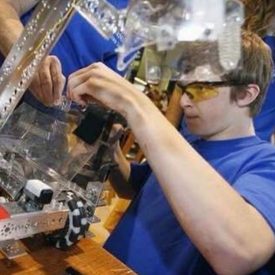 Eugene and Sam credit the program for allowing them to be independent and claim complete ownership over their work – something they hadn’t experienced before. The two remembered the collective atmosphere of each project they tackled and the comradery that was built between their peers. Engaging in an atmosphere of those who cared about robotics as much as themselves fueled their passion and energy for each project.

“The program empowered me to become a leader and take ownership of my work as something tangible,” Eugene said. “Even today, it feels like a privilege to have been a part of something so unique and whole, where everybody is trying to achieve the same goal as you, but all bring different skillsets to the table. The connections I made within the program and at Corning are invaluable, and it all started with something I took as a hobby.”

Eugene and Sam continue to give back to the program today to share what they’ve learned with the next generation of technology leaders. Eugene volunteers as a coach with the Enderbots team, attending their weekly meetings and most of their seasonal competitions, while Sam volunteers as a referee and a mentor to the Corning teams.

“I continue to volunteer my time to the program because of the impact it had on my career,” Eugene said. “I’d like to pass along my perspective to the current generation and be able to contribute to their success and motivate them for their future. Being a coach now in the program also allows me to continue building my own leadership skills in mentoring and decision making.”

“I remember how valuable the program was to me,” Sam said. “It feels like it’s more than giving back. Along with the work of some amazing Corning volunteers, making the smallest difference in the lives of those in this program can go a long way into building some of the best and brightest problem solvers at Corning and beyond. It matters because they matter, and it certainly helped me get to where I am today.”