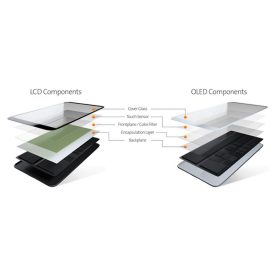 Most people realize that glass is used on the surface of their television, laptop, tablet, or smartphone, but did you know that glass plays an important role inside those devices? Glass enables many of the performance features today’s buyers demand – damage resistance; clear, vivid colors; quick, responsive touch; and extended usage time.

To understand how glass contributes to the protection and performance of your favorite devices, we need to look inside. Every television, computer, or mobile device can have multiple layers of glass inside and each layer has a specific task. The number and purpose of the layers varies according to the type of device, its features and functions, the type of display it contains, and the process used to make it.

The electronic devices you see and use every day – televisions, laptops, tablets, and smartphones – typically use either liquid crystal displays (LCDs) or organic light-emitting diode (OLED) displays. Both can deliver high performance, but each works in a unique way.

The fundamental difference between LCD and OLED display technologies is the light source. The light in a liquid crystal display comes from light-emitting diodes (LEDs) inside the device. These lights, sometimes called a backlight, are similar to those you see in popular LED flashlights. OLED displays do not need a separate light source in the device, because OLEDs emit their own light when charged by an electric current.

Both LCD and OLED displays contain multiple glass layers – though a slightly different combination – and a massive amount of transistors to provide sophisticated functionality.

Working together, these glass layers create resilient, responsive devices with vivid displays. But, this is not ordinary glass – it is advanced glass, specially formulated and manufactured to be ideally suited for today’s electronics. Because even minor imperfections can spoil your images, these displays must have a near-perfect surface. The material must be durable and have uniform quality throughout to provide reliability and high-performance.

Crafted using a proprietary fusion process, Corning’s advanced glass supports the intricate layers of microelectronics and components working inside and delivers a highly responsive and engaging user experience. For more than 160 years, Corning has leveraged a deep knowledge of glass properties with engineering and manufacturing expertise to answer the needs of the growing consumer electronics market and enable future innovations.