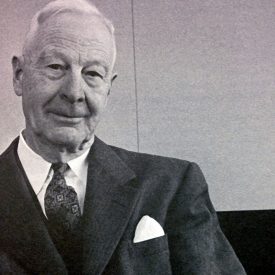 Dr. Taylor was the coinventor, with Dr. Eugene C. Sullivan of heat and corrosion-resistant glass marketed under the Nonex® and Pyrex® trademarks. He was the first scientist hired by Dr. Sullivan, in 1908, as Corning established its R&D facility.

During his tenure as director of glass technology, he did considerable work in batch testing and composition, and directed several laboratory groups in fundamental research for glasses of stronger physical strength.

Dr. Taylor was elected as a Corning vice president, in 1943, and soon after named director of the Manufacturing and Engineering Division.  One of the most important aspects of Dr. Taylor’s legacy was in the many young scientists he hired and worked with at Corning; the names are well known here: Mr. Harrison Hood, Dr. J. Franklin Hyde, Dr. Martin Nordberg, Dr. S. Donald Stookey, and more.

During his 50-year career at Corning, Dr. Taylor saw glass technology undergo a complete revolution in methods. He witnessed the change from the melting of glass in pots to continuous melting in tanks, and the manufacture of glassware from hand-blown methods to fast production by machines.