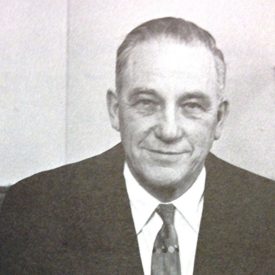 Harrison Hood joined Corning Glass Works as a Research Chemist, reporting to Dr. William C. Taylor, in 1920, after receiving a Bachelor’s Degree in Chemistry from Cornell University, serving as Second Lieutenant in the U.S. Army, and as a research chemist for Brown Co, in Berlin, New Hampshire.

Mr. Hood’s entire career at Corning was associated with the Research Laboratories.    He was active in all aspects of R&D: glass composition, glass melting and process research.  In the 1920’s, working to remove impurities and “stones” from Corning’s borosilicate glasses, Harrison Hood realized any material not melting properly in the glass tank was worth investigating as a solution for tougher refractory compositions.  Cooperating with physicist G. S. Fulcher, Harrison Hood developed the electrically molded aluminum silicate refractory materials named Electrocast which significantly prolonged the lifespan of melting units, and became the base product for Corning’s new company: Corhart.

In 1939, his collaboration with Dr. Martin Nordberg produced the Vycor 96% pure silica glasses.  They have been used in a wide range of products including  early spacecraft viewports and laboratory glassware. Harrison Hood credited his success to an atmosphere of freedom for the creativity of finding solutions to problems.

Harrison Hood was a fellow of the American Ceramic Society, received the prestigious John Price Wetherill Medal of the Franklin Institute, the Sullivan Award of the American Chemical Society, and was granted more than 40 patents.