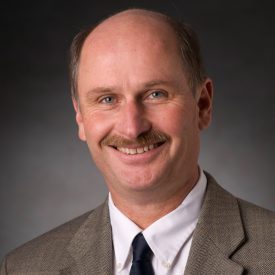 Corning has continued its annual Gordon S. Fulcher distinguished scholar program for the fourth year in a row, allowing faculty from academic institutions to take part in a sabbatical program within Corning’s Research & Development organization.

Sullivan Park welcomed Professor Michael T. Lanagan, professor of engineering science and mechanics at Pennsylvania State University, for a sabbatical that ran from Sept. 2018 until Feb. 2019. During his time at Corning, Professor Lanagan worked to develop a fundamental understanding on dielectric properties of glass.

“With 5G communication rolling out on mobile devices, low dielectric materials are needed to increase the antenna efficiency,” said Jingshi Wu, research scientist and chair of the Fulcher Sabbatical Committee. “Understanding how the elements and atomic level structures in glass affect dielectric properties becomes very important and Prof. Lanagan’s research is helped us gain more fundamental knowledge in the area.”

Lanagan used his time at Corning to advance his expertise in 5G communications and believes his sabbatical helped build a bridge between academia and Corning.

“The Fulcher sabbatical provided me with the opportunity to learn about the microwave and mm-wave properties of glass which is an important topic for 5G communications,” Lanagan said. “The research resulted in a publication and a collaboration network for future research projects with Penn State and Corning.”

The sabbatical program was named after Dr. Gordon Scott Fulcher, a Corning glass and ceramics scientist who worked at the company 1920 until 1934. Dr. Fulcher was responsible for pioneering research and development of refractory materials with high electrical resistivity and introducing the Fulcher equation for viscosity. Prior to Professor Lanagan’s sabbatical, Corning has also hosted Professor Phil Salmon and Research Fellow Anita Zeidler from the University of Bath in the United Kingdom as well as Professors Liping Huang and Yunfeng Shi of Rensselaer Polytechnic Institute in Troy, NY. Professor Sharafat Ali, an associate professor at Linnaeus University in Sweden was the winner of the third Fulcher Sabbatical in 2017.

“This program creates a relationship between industrial research and academia; helping academia understand and study current problems within the industry,” Jingshi said. “It also facilitates close interactions with university faculty and students which helps build the next-generation of researchers.”

Dr. Jincheng Du, a materials science professor at the University of North Texas, forged relationships and collaborations during his time spent with Sullivan Park researchers.