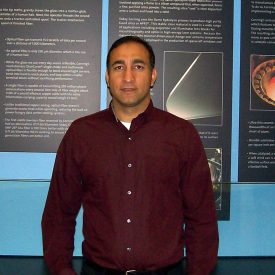 For the third year in row, Corning has hosted its annual Gordon S. Fulcher distinguished scholar program where participants apply for an opportunity to participate in a sabbatical within Corning’s R&D organization. Professor Sharafat Ali began his sabbatical at Corning’s Sullivan Park Research Center in January of 2017 and will be completing his tenure near the end of the year.

Sharafat is currently an associate professor in the department of Built Environment and Energy Technology at Linnaeus University in Sweden. During his sabbatical, Sharafat has been focused on oxynitride glasses. “Introducing nitrogen into glasses can help improve their mechanical and optical properties for high technology glass applications,” he said.

The sabbatical program was named after Dr. Gordon Scott Fulcher, a Corning glass and ceramic scientist from 1920 until 1934. Dr. Fulcher was best known for the creation of the transformative three-parameter model of viscosity known as the "Fulcher equation.”

“Sharafat’s research will enrich Corning’s portfolio as oxynitride glasses have many desirable properties,” said Jingshi Wu, research scientist and chair of the Fulcher Sabbatical Committee. “And, while we’re learning from him, he gets input from Corning colleagues on what specific properties or processes could benefit the work he’s doing – so his sabbatical is a great learning experience for everyone involved.”

Sharafat has enjoyed his sabbatical experience at Sullivan Park – especially the people and dynamic environment. “I’ve been impressed to see people with diverse educational and work backgrounds collaborate so well together on meeting common objectives for the company,” he said. “In addition, I’ve found the technical staff at Sullivan Park to be really easy to communicate with – always willing to listen to ideas, provide their perspectives and ultimately, figure out how they can help you.”

Since 2015, Corning has hosted two sets of sabbatical participants: Professor Phil Salmon and Research Fellow Anita Zeidler from the University of Bath in the United Kingdom as well as Professors Liping Huang and Yunfeng Shi of Rensselaer Polytechnic Institute in Troy, NY.

“There is a common conception is that academic research is focused on fundamental science and industrial research is focused on innovation,” Jingshi said. “This program builds a bridge between academic and industrial research and also helps the academic research community to understand what problems are more relevant to industry.  In addition, all our previous participants of the program are still collaborating with Corning after they left Sullivan Park which is really exciting.”

During his sabbatical with Corning, Professor Michael T. Lanagan, professor of engineering science and mechanics at Pennsylvania State University, worked to develop a fundamental understanding on dielectric properties of glass.