Generally speaking, bad things can happen when a cell sample temperature gets too hot or too cold. Temperature instability can affect many downstream variables in any given project, from limiting the functionality of reagents or other experimental agents to eventually killing good cells. These impacts can delay timelines, increase costs, and diminish data integrity.

Despite the importance of consistent temperature regulation in the lab, sometimes sample viability can become a saga of "survival of the coolest." But when cultures rely on outside cooling mechanisms like electricity or ice—or live in a busy environment with a lot of people flowing in and out—those survival odds can take an unfortunate hit.

So what can scientists do about this issue? We sat down with Corning Scientific Support Manager Kyung-A "Katie" Song, Ph.D., to get her expertise on how to control temperature in a lab.

Survival of the Coolest Infographic

Your cells are precious. Download our guide to help you successfully freeze animal cells and manage a cell repository.
Learn More> 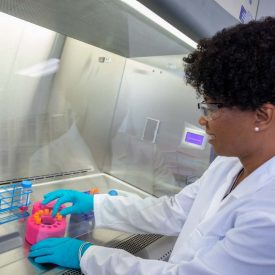 However, it's not just cell viability that's at stake here. Reagents, enzymes, and other experimental carriers are also very sensitive to stable temperature conditions. With improper regulation, not only can cells die, but reagents and enzymes can be similarly affected and rendered unusable. This drives up costs.

So you can see why temperature regulation is so important. Without it, an experimental result can be unreliable or unpredictable—or your time, effort, and costs can be negatively affected.

Q: Is overcooling as big a risk as overheating?

Yes. We commonly think about overheating because the cells are composed of a protein that generally cannot withstand high temperatures, but overcooling can also be dangerous to cells. For example, at subzero temperatures (Celsius), ice crystals begin to form inside the cell, which changes the concentration of the culture medium. As a result, water begins to move out of the cell, initiating dehydration and shrinking, and leading to cell damage and death.

Q: Why is temperature so tricky to control in the lab setting?

Lab environments usually need a range of constant, stable temperatures for many different applications. For example, Eukaryotic cell culture conditions usually need to be at 37 degrees Celsius with carbon dioxide gas, but reagents and enzymes should be stored at -20 or -80 degrees Celsius.

So to address this variety of temperature demands, a lab will typically have different refrigerators, freezers, incubators, water baths, heat blocks, and other tools. All of these mechanisms are susceptible to problems and need regular inspection, maintenance, and monitoring. They're also usually dependent on electricity, which can be problematic during utility blackouts.

Aside from these factors, labs can also be busy, shared spaces with many people coming in and out. So even with the best equipment, it's challenging to maintain a stable temperature when you have a door that's constantly opening and closing.

Q: What are the known problems with traditional temperature regulation equipment?

There are certainly challenges to having battery- or electric-dependent appliances or other tools that need frequent monitoring and replacement, which can be expensive, time-consuming, and labor-intensive.

Similarly, containers that are dependent on ice for cooling can require frequent ice changes and trips to the ice machine, and there's always a contamination risk when melted ice seeps into vials. Ice cooling can also impact temperature stability. When you measure the temperature of a plate directly on ice, you'll find that the temperature in each well isn't uniform.

There are also challenges associated with the conventional isopropanol container, or IPA—affectionately known as Mr. Frosty. IPAs are used in many labs for cryogenic freezing, but they come with several disadvantages, such as the need to check and refill the isopropanol after every five uses. Also, alcohol degradation can lead to temperature variability, and the screw cap can be difficult to remove when frozen.

Q: What are some good investments to consider when shopping for cooling tools?

Good choices include systems that don't have as many of the dependencies and disadvantages you see from ice baths, IPAs, or battery-powered or electricity-dependent appliances. It's also smart to ensure that tools are portable. Our alcohol-free system, Corning® CoolCell® container, is one option. This container provides a consistent cooling profile without the downsides of a traditional IPA container and without ongoing operating costs.

Similarly, we also have the Corning CoolRack® module as a temperature stabilization barrier for tubes placed in ice baths. This product is made of proprietary thermal conductive materials which reduce the variability that comes from tubes or wells being placed directly on ice or other temperature sources. As another option that doesn't depend on ice, the Corning CoolBox™ module enables prolonged cooling for up to 16 hours or freezing for up to eight hours with one Corning XT cooling core.

Q: What else should scientists know about sample temperature control in the lab?

It may seem like a basic thing, but the principles of temperature regulation are very important and worth revisiting for scientists of all backgrounds and experience levels. Very often when you're troubleshooting, the key to success comes down to addressing temperature variability—whether the focus is on sample temperature control or regulation of reagents and enzymes. Even small things can make a big difference.