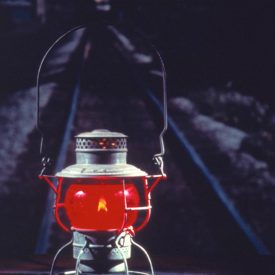 U.S. railroads faced a long list of tough problems in the dawn of the 20th century – and Corning’s leadership in materials science played a key role in helping to solve them.

The country was rapidly becoming more industrialized, and the cross-country rail system was flourishing. At the same time, train travel was becoming increasingly dangerous for passengers and railroad workers alike. Lanterns marked crossings or hazardous areas, but engineers were often unable to see the warning signs clearly through the haze of smoke or inclement weather.

Collisions or derailments were tragically frequent.

In late 1901, more than 100 animals died – and sharpshooter Annie Oakley severely injured – in a head-on train collision in North Carolina. Just a few months later, dozens of people were killed or injured in New York City when one train rear-ended another. Signals had been masked by steam and snow. With more traffic on the rails, tens of thousands of people each year died or were hurt in similar accidents.

Adding to the confusion: There was no standard for colors in the visual signal system. Red, generally accepted as the “stop” or “warning” signal, could appear as yellow or orange on a stormy night. Some railroads simply used a white light to indicate safety. As for green, there were 32 variations of the color in use, and distinguishing it through a haze was often impossible.

The railroad industry already had confidence that Corning could help solve the problem. During the 1870s, the young company had taken a novel approach to an earlier rail signal problem – dirt that caked in the concentric bevels of the glass lens, obscuring the internal light. Corning, with its growing knowledge of optical physics, could accurately analyze the way the light refracted through the series of exterior bevels, allowing beams to spread out in all directions. A team of scientists repeated the phenomenon with bevels on the inside of the lantern – all with a glass formula that could withstand the heat of an internal flame through a subzero-temperature winter.

Corning was convinced that the new era of  railroad signal challenges was, at its heart, at materials science problem.

Working with a Cornell University psychologist, Corning chemists determined the precise shades of red and green in the lead-alkali glass signals that would be most luminous under a wide range of weather and lighting conditions. Selenium, for example, yielded a glass composition with the perfect shade of red, while still preserving the properties of strength and thermal stability needed under rugged outdoor conditions.

Project leader William Churchill wrote that “achieving the perfect lens color depended on tight control over numerous factors: the purity of raw materials, the composition of the batch, the reaction of coloring oxides with the batch, the precise temperature of the furnace, the duration of the melt, and the quality of annealing.”

By 1908, the railroad industry – so pleased with the improved performance of the new signal lanterns – adopted Corning’s shades of red and green as the nationwide standard. Around the same time, other safety measures (including federal mandates for improved brakes, inspection systems, and regulations on transporting explosives) went into effect.

The combined changes resulted in an astonishing improvement in railroad safety.  Fifteen years after the adoption of signal standards, fatalities on U.S. rail operations had dropped nearly 70 percent.

It was one of the commercial world’s first examples of how specialty glass – developed through a relentless team of exploratory researchers – could have a profound impact on daily life.