"We support art and culture institutions as part of our effort to make our communities better places to live and work. We believe it enhances the quality of life for our employees and neighbors, increases the vitality of the communities, and often strengthens economic health."
— Wendell P. Weeks, Chairman and Chief Executive Officer 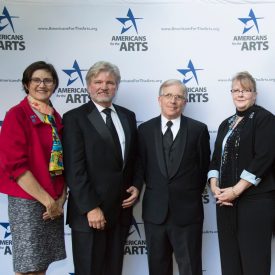 Dan Collins, Corning’s vice president of corporate communications, on the red carpet of the event with representatives from the BCA 10 and Karen Martin, president of the Corning Foundation.

Recognized as one of 10 businesses for its support of the arts in America, Corning recently accepted the honor at BCA 10 in New York City.

Corning Incorporated has been recognized by Americans for the Arts for its exceptional support to the arts community.

Corning accepted a BCA 10 award at a ceremony in New York City on Oct. 6 after being nominated by the Corning Museum of Glass (CMoG), which sought to highlight Corning’s sustained dedication to the arts on a national platform. Corning joined the BCA ranks with nine other honorees this year, including AutoZone, GE’s FirstBuild and The Trust Company of Kansas.

In addition to creating CMoG in 1951, Corning has been an arts advocate in a number of ways, including commissioning 11 glass sculptures for Corning’s headquarters, being a generous benefactor to numerous arts organizations, and encouraging employees to actively participate within arts organizations.

Corning established the Corning Incorporated Foundation in 1952 which provides targeted support to advance art and cultural programs. To date, the Foundation has distributed $154 million in grants with an average of 25% annual giving directed towards cultural and artistic efforts.

"As a company dedicated to life-changing innovations, we also know that creativity is a synergistic process. We all benefit from organizations that stimulate our senses, inspire our minds, and encourage our curiosity." 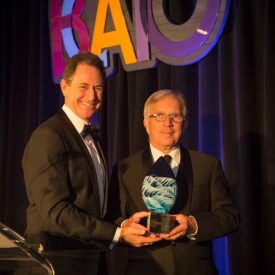 “Our continued support of The Corning Museum of Glass, The Rockwell Museum of Art, and other art and cultural institutions is important for so many reasons,” said Dan Collins, Corning’s vice president of corporate communications, who accepted the award. “It enhances the quality of life for our employees and neighbors, increases the vitality of the communities, and often strengthens the economic health as well.”

As a presenting sponsor at this year’s gala, Corning continued to show its steadfast pledge to support the arts everywhere, but especially to helping transform the greater Corning area into a world-class arts destination.

“As one of the world’s foremost specialty glass companies, Corning has the unique opportunity to promote past, present and future achievements with glass through its arts support,” said Robert Lynch, Americans for the Arts’ president and CEO. “Launching programs to help the arts flourish in its local communities, Corning helps ensure the arts will stay vibrant in its region.”