3D Human Spheroids as a Predictive Model in Drug Discovery

The following article originally appeared on June 13, 2018 in SelectScience here.

Dr. Ryan Gordon, VP of Business Development and Commercialization at StemoniX, discusses the potential of human spheroids in predictive assays. 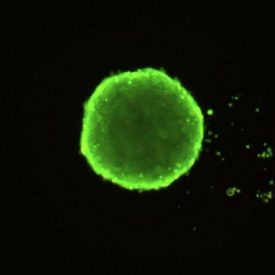 In a field divided between in vivo and in vitro studies, scientists often weigh out the respective caveats before designing an experiment. While 2D in vitro experiments fall short in recapitulating the structural complexities of the human body, the pharmacological compounds tested for safety and efficacy through in vivo studies using animal models often fail human clinical trials. As a solution to overcome these shortcomings, scientists have recently dedicated efforts towards growing a 3-dimensional, self-organizing human organ in a dish – the human spheroid.

In this SelectScience® interview, we speak with Dr. Ryan Gordon, VP of Business Development and Commercialization at StemoniX, a company that specializes in supplying homogenous 3D spheroids. Gordon discusses the applications for organoids, particularly 3D cortical spheroids, in early drug discovery and elaborates on factors that can make or break reproducible data in pharma.

StemoniX was founded on the premise of creating physiologically-relevant human-based in vitro models to improve predictivity in drug discovery,” says Gordon. “Our microOrgan platforms better reflect the structure, morphology, and function of the organs they represent, and we do this scalably to meet the high-throughput requirements in drug discovery and toxicology screening.

StemoniX, which recently celebrated its four-year anniversary, was founded after a personal health struggle for its co-founder, Ping Yeh. After being diagnosed with Hodgkin’s lymphoma, Yeh learned of a startling state of affairs in the field of medicine: there was no test to measure if his heart could handle the toxicity of a chemotherapy before the treatment. The only available test was a post-measurement made after he received a maximum potency chemo dose — a risk he had to take to cure his cancer. Spotting an opportunity for predictive assays, Ping, now a cancer survivor, created a team that developed and began supplying 3D human spheroids to aid in vitro tests for clinical development. That team is StemoniX.

The ‘microBrain 3D’ platform offered by StemoniX comprises mature human iPSC-derived cortical spheroids where neurons and astrocytes grow together to mimic the milieu of the human brain, while their ‘microHeart’ platform consists of human cardiomyocytes aligned as fibers to match the native human heart tissue. StemoniX provides microBrain 3D and microHeart as Assay Ready plates, delivered to their customers as pre-plated assays that are ready for screening experiments.

Since the advent of human iPSCs in 2006, it is evident that they serve as an excellent translational model to study human diseases. However, current protocols aren’t optimized and can lead to variable spheroid size and function, making it very difficult to extend the benefits of iPSCs to screen drugs. “We’re not only interested in developing assays that are predictive – which is the main goal with these models – but we must also be able to offer consistent and reproducible assays. This has been a large concern for the industry due to the high variability seen in iPSC-based assays during drug discovery,” says Gordon.

In collaboration with pharma companies, the microBrain 3D spheroids have been validated as a high-throughput system for a range of discovery and toxicology applications. With only one spheroid per well, an analysis of spheroid size distribution demonstrates a consistent spheroid size of greater than 575µm in diameter with a coefficient of variation less than 2.7%.  Immunostaining revealed a balanced population of cortical neurons and astrocytes in the spheroids, and calcium mobilization experiments captured spontaneous synchronized calcium oscillations that can be readily quantified and modulated. A recent screening study of the LOPAC 1280® compound library (a collection of 1,280 compounds) showed low variability, with coefficients of variation across replicates of less than 15%, validating its use in a high-throughput setting.

"We’re not only interested in developing assays that are predictive – which is the main goal with these models – but we must also be able to offer consistent and reproducible assays."

"In order for microBrain 3D to yield highly consistent results, the quality of the plates was critical."

“Essentially, we’ve taken on the high-quality challenge on behalf of the discovery and toxicology scientists. We’ve eliminated their need to maintain cell cultures for weeks and months by delivering to them a pre-plated, mature cell-based assay that integrates easily into their screening workflow,” explains Gordon. The microBrain 3D cells aren’t shipped cryopreserved like most cell lines, but come in a ready-to-use 384-well format. This choice to make the assay experiment-ready initiated StemoniX’s collaboration with Corning, an industry leader in 3D cell culture and other cell culture products.

“Working with Corning has been terrific. In order for microBrain 3D to yield highly consistent results, the quality of the plates was critical,” says Gordon. “So, selecting a high-quality vendor such as Corning that correlates with high-quality plates was paramount for us.”

The spheroid microplates from Corning are designed for consistency across all wells and bear an ultra-low attachment surface that reduces cell adhesion to the wells. These plates also enable assaying of spheroids on the same microplate without the need to transfer them. “The image quality of these plates is very high,” says Gordon. With an optically clear round bottom and black opaque microplate body, the microplates are more conducive to imaging and eliminate edge effects. “Corning microplates are also compatible with the variety of microplate readers and equipment that our customers use,” Gordon adds.

Human spheroids are here to stay and will quite likely play a significant role in clinical applications. “With human iPSC technology just over ten years old, it’s still a new industry, and we’re only scratching the surface of the application potential of iPSC-derived spheroids to the pharmaceutical industry,” explains Gordon. “The true test of the transformative power of this new industry will be when compounds discovered and developed on iPSC-based platforms not only routinely reach human clinical trials but also progress successfully through to regulatory approval at a higher rate than their predecessors.”