Technology That Transforms the World

Technology That Transforms the World 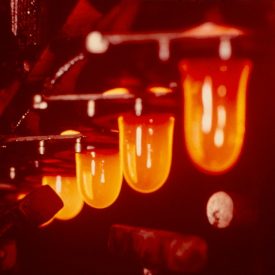 “Smokestack University” was the name that residents of Corning came to call the company in the 1870s. The small town was filled with inquisitive scientists and Ph.D.’s, all of whom were hired to work inside the Corning factories to research and develop new products, and improve their manufacturing processes.

By the time scientist Dr. Eugene Sullivan signed on with Corning in 1908, there was no question that research and development would drive the company’s future. Sullivan introduced and established a scientific method of discovery in Corning's industrial R&D environment. For him, understanding the chemistry of glass meant that he could tailor its properties and find new ways to use it.

Sullivan went on to design Corning’s research facility in 1916, one of the earliest corporate research labs in the United States that is now known as Sullivan Park. Its researchers, spanning a wide range of disciplines from chemistry to biochemistry to physics to mechanical engineering, were granted the freedom to pursue open-ended research while at the same time seeking practical applications for whatever they chose.

Through Sullivan’s efforts, the name "Corning" became synonymous with glass research, and the company moved from a place of "invention to innovation.” This was the beginning of the dynamic research philosophy and transformative innovation that defines Corning today.

Every year, the company reinvests between eight to ten percent of its revenues in R&D. Currently, we have more than 2,000 scientists working across the globe, focused on everything from telecommunications enhancement to cleaner air.

Corning’s success still stems from our founders’ deep belief in the scientific approach to glassmaking. Their philosophy: let other companies stamp out drinking glasses, bottles, and plate glass windows. Our people would focus on more vexing problems like creating the heat-resistant glass sleeve for Thomas Edison’s light bulb and developing a reliable railroad signal that could reduce fatalities. We wanted to make the transformative technology and transformative innovations that could change the world.

And over the last 160 years, Corning certainly has made some impactful contributions. To date, Corning has supplied the windows for every manned U.S. spacecraft since astronaut John Glenn first orbited the earth in 1962. Penicillin was developed in its PYREX® petri dishes. Corning-produced glass jars were used to grow Jonas Salk’s anti-polio vaccine. The company invented the ceramic substrates used in catalytic convertors that remove harmful pollutants from a car’s exhaust system and then invented a similar process to reduce the pollution emitted by diesel engines. Low-loss optical fiber was invented at Corning, a technology that enables today’s high-speed Internet by moving millions of bits of data at the speed of light. Corning glass, pristine and durable, is used in a wide range of transformative innovations and technological marvels, from high-definition flat-screen TVs to tablets and the latest smart phones.

Yet inside Sullivan Park and Corning’s research and development facilities around the globe, they strongly believe that innovation is still about a lot more than discovering a new material. Innovation also means finding practical uses for a material and then devising more efficient ways for producing that product.

To be sure, innovation doesn’t happen overnight. We recognize that R&D is only as successful as the people advancing it. At Corning, our culture is, and always has been, driven by the dedication and determination of our teams. However practical or theoretical our daily work may be, we each strive for one ultimate goal. We want to create the solutions that change lives and help people live better. Whether that happens today or far into the future, we won’t stop.