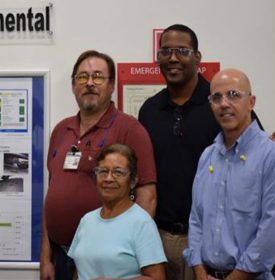 Employees at the Optical Communications plant in Phoenix, Arizona are driving an award-winning environmental program that, in two years, has resulted in a significant reduction in waste going to landfill, reduction in overall water use, and a big increase in recycling efforts.

The plant, which produces radio-frequency connectors for broadband, military, and aerospace applications, saw the following environmental improvements from 2014 through 2016:

In 2016, the plant partnered with a local vendor to begin a compost initiative to recycle paper towels, plates, and food waste as it moves closer to its zero-landfill goal. The plant met its objectives of 96 percent landfill-free over the past two years, raising the bar for other Corning facilities.