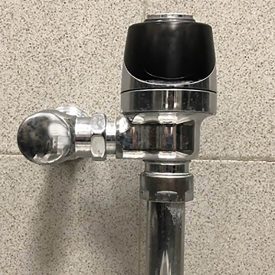 The teams all tackled water waste in their facilities’ restrooms, replacing older fixtures with high-efficiency models in 2017. RAM, an Optical Connectivity Solutions (OCS) plant, replaced handle-flush systems with sensor-flush on all the plant’s toilets and urinals and installed water-free urinals. RCC, a joint-OCS and Optical Fiber & Cable plant, and RY1, an OCS plant, installed water-free urinals in office areas.

“We did this project because of the level of water consumption at the plant,” said Cesar Guerra, project leader at RAM. “Having a lot of employees makes this an important issue. Imagine the frequency at which the toilets are used day-to-day.”

Guerra said he and his project team analyzed water use at the plant in 2016, and identified restrooms that were wasting too much water.

“Knowing that water-saving technology exists, we decided to make the change for a more efficient way to reduce our water consumption,” he explained.

Replacing the old toilets and urinals is saving nearly twice as much money per year as the project cost to complete. The toilets are using less than one-third the amount previously used per flush, and the new urinals eliminated all water use.

“RCC was looking for water savings projects. After we performed a water study in the plant, we found that restrooms are a big water consumption contributor,” said Moreno.

By the end of July 2017, RCC’s office areas had new urinals, which are estimated to save a significant amount of water per year. The project will pay for itself in a little more than a year by saving on maintenance and water-related costs.

“Another reason for this project was to be more environmentally-friendly,” said Moreno. “We are always looking for ways to save water and energy.”

RY1’s team completed a similar project by installing water-free urinals in office areas, said Jorge Gonzalez, site energy manager and facilities project engineer. The plant’s new urinals are saving thousands of gallons of water per year, with a project payback of less than one year.

Gonzalez shared benefits beyond water and cost savings: “They [the urinals] generate a minimum amount of wastewater and minimal amount of water that is sent for treatment. Water that is not consumed there can be used in other places when needed.”

Together, the three plants’ projects cost just over $42,000, but are saving Corning nearly double that per year. The total water savings of nearly a million gallons per year supports GEM’s goal to reduce and recycle water at every Corning facility.

Gonzalez said these projects “contribute to a better environment.”