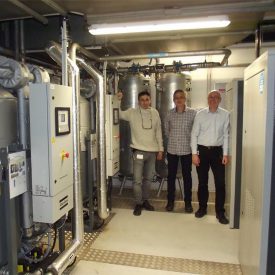 Pictured is the CETC project team with the facility’s new air compressor system.

In 2016, the team at Corning’s European Technology Center in Avon, France, made a decision that is paying off today by saving money and being more environmentally friendly.

“We replaced our air compressors with a new technology that is 100 percent oil-free,” said Christophe Boros, member of the site’s Global Energy Management (GEM) team. “The installation is now totally operational and running smoothly.”

Boros explained that the facility’s old system used oil to cool the compression system. Even when the machinery was in its ‘idle’ mode, the system motors were still running, which translates to high energy consumption.

The team started investigating and reviewing alternative replacement options in 2015. Their objectives and expectations were as follows:

•       Increase the production capacity and flow available, and have a redundancy for maintenance reasons.

•       Add a third, smaller compressor to adjust to the facility’s needs, and provide compressed air at low flow, with low energy consumption during nights and weekends.

While researching options, Uta Boltze, European environmental manager, introduced the team to a new technology: compressors that are cooled and lubricated by water injection, meaning they use no oil. The simplicity and reliability of the equipment, the reduced maintenance needs, and the variable modes available were additional advantages.

The teams broke down the costs of the two best options – variable speed compressors with oil and the 100 percent oil-free option. After weighing all pros and cons, the oil-free option was chosen.  In addition to the initial benefits, Boros said the team found the selected option to be more energy efficient.

Rudy Gottardi, GEM team member, led the installation project, which was fully connected to the building upgrade and sprinkler deployment in 2017.

As an added benefit, the team was awarded a global environmental award for the project last year at Corning’s Global Environmental Health & Safety Conference.

“We would like to thank Uta, who knew about our compressor project and pointed out this technology to us that none of our vendors had even mentioned. She knew about this technology thanks to another Corning site, which had approached her to get her assessment of the technology. We would also like to thank the GEM organization for their financial support, as they funded part of the project,” said Boros. “We are often talking about best practice sharing, and this is a perfect example and application.”