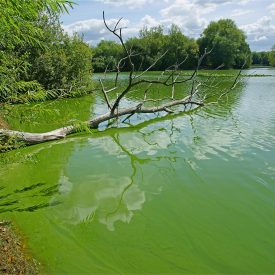 As part of Corning Incorporated’s commitment to sustainability, the company is taking steps to help solve a problem plaguing waterways around the world – harmful algal blooms.

What are harmful algal blooms (HABs)?

Harmful algal blooms, or HABs, are certain types of algae that negatively impact the quality of water and can produce toxins harmful to people and animals. According to the U.S. Environmental Protection Agency (EPA), HABs usually occur during hot, calm weather, and are caused by an influx of nutrients in water – particularly nitrogen and phosphorus.

HABs deplete oxygen levels in water, which can kill aquatic plants and marine life. The blooms can also cause health issues in humans and animals, including irritation of the skin, nose, throat, eyes, or respiratory system, nausea, headaches, liver or kidney damage, or death. According to the Center for Disease Control, no human deaths have been reported in the U.S. due to HABs, but several pets, wildlife, and livestock have died as a result of HABs exposure or ingestion.

HABs, which can occur in both fresh and saltwater, have been reported around the world, including in all 50 states. The Finger Lakes region of New York, just north of Corning’s headquarters, has experienced an increase of HABs in the past few years. ­

Why is Corning concerned about HABs?

Corning believes protecting the environment makes good business sense, and is committed to doing so through the continuous improvement of processes, products, and services. This boosts the economies where Corning operates, promotes tourism and job growth, aides in attracting and retaining great talent, and preserves the health of our environment for future generations.

GEM is also committed to educating Corning employees and the public about conserving natural resources and issues affecting our environment, such as HABs.

“Waterways being affected by HABs are the same that provide drinking water, offer homes to fish and other wildlife, attract visitors and new talent to the area, and are the places our kids might learn to swim,” said Patrick Jackson, director, Corning Global Energy Management (GEM). “It only makes sense that Corning uses its connections and resources to try to help.”

What is Corning doing about HABs?

Finger Lakes HAB Symposium — In 2014, GEM teamed up with the Finger Lakes Institute at Hobart and William Smith Colleges (Geneva, New York), as well as other organizations in the region, to host the now annual Finger Lakes Harmful Algal Bloom Symposium.

“We’re proud to have been involved in this outstanding event for the past five years,” said Jackson. “This is our way of helping to educate the public on the threat of HABs, and bring together state and local officials to work together to combat the problem.”

Nine Element Plan — In 2018, Corning Enterprises committed $50,000 toward the development of a comprehensive watershed plan covering both Seneca and Keuka lakes, in the area surrounding Corning’s Headquarters in New York. The Nine Element Plan is based on nine components identified by the EPA as being keys to successful watershed plans to reduce pollutants and monitor water quality.

The sensors Corning produces have the capability to detect things like diseased crops, burnt land, geology characteristics, forest health, cancer cells and other health afflictions, and industrial process efficiency, among others.

GEM, AO, and several New York colleges are collaborating to test HSI capabilities in detecting HABs in freshwater lakes. Corning will provide four drone systems equipped with its HSI sensors, and provide engineering support and partial funding to support the institutions in their research. Test flights are scheduled for Fall 2018, with operational flights expected to begin in Spring 2019.