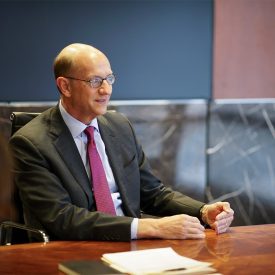 Corning Incorporated and Earth Day will be forever linked.

Earth Day was established on April 22, 1970, when U.S. Senator Gaylord Nelson attempted to channel the energy of the anti-war movement into a single day focused on the environment. The idea worked – more than 20 million people demonstrated across the country, and the U.S. Environmental Protection Agency (EPA) was founded just months later.

That year also saw amendments to the federal Clean Air Act, which regulated emissions for mobile pollution sources such as cars, planes, and trains as well as stationary ones like factories and power plants.

For the next two years, Corning worked to develop a solution so automakers could meet these new standards. The pressure was on, but Corning answered the call in 1973 with the production of the first cellular ceramic substrate, launching a global clean-air movement.

In 1978, Corning developed the ceramic particulate filter, together with the cellular ceramic substrates to form the core of world-class emissions control systems and clean-air technologies. From light-duty passenger cars to heavy-duty trucks and construction equipment, these systems deliver consistent, reliable, and durable performance under demanding conditions.

Now, Corning is working with automakers in Europe and China to meet new clean-air standards and create even more effective and durable substrates and filters. These emission control products have prevented more than 4 billion tons of both hydrogen and nitrogen oxide, and over 40 billion tons of carbon monoxide from entering the air. This is equivalent to the emissions produced by nearly 230 billion passenger cars driven for a year, or more than 14 billion tanker trucks’ worth of gasoline. 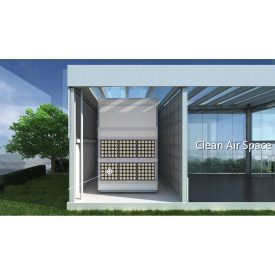 In the decades since Earth Day was established and the ceramic substrate was developed, Corning has remained committed to researching, developing, and engineering environmental technologies and products that improve the quality of both the air we breathe and the environment in which we live.

Although the Corning Air Treatment System is still a prototype, its core technology evolved from the mobile emissions technology that Corning developed more than 40 years ago. Now, that technology can be used in indoor air ventilation systems and large outdoor air treatment systems.

In addition to Corning’s products, the company also strives to reduce the use of resources such as energy and water in its facilities around the world. Through the efforts of the company’s Global Energy Management program, Corning has been named an ENERGY STAR® Partner of the Year by the EPA for six consecutive years.

Recently, Corning cut energy intensity in half at its fiber and cable manufacturing facilities around the world. This reduction required a variety of energy conservation steps, including installing LED lighting, optimizing manufacturing equipment, and implementing process improvements.

Earlier this month, Corning announced the construction of a solar array at its facility in Oneonta, New York. The array will produce more clean energy for consumers and reduce greenhouse gas emissions in the community. This solar project joins nine others that Corning has already constructed around the world, as well as a power purchase agreement for clean energy produced at one of the largest solar fields east of the Mississippi River.

“We are really proud of the commitment we have made to make our communities cleaner and safer,” Musser said.

Through constant innovation of both our products and our processes, Corning has demonstrated its ongoing commitment to clean air and a healthier environment. It’s a commitment that’s existed since the first Earth Day, and one that will continue to shape the way Corning operates for generations to come.