Corning Specialty Glass helps refurbish the Choir of the Cathedral of Saint Denis in Paris, France 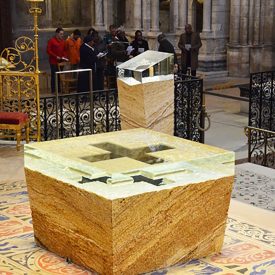 ​The Corning Specialty Glass plant in Bagneaux sur Loing created this large glass slab weighing almost 900 pounds for a new raised pulpit in the Cathedral Basilica of Saint Denis in the city of Saint-Denis, a northern suburb of Paris.

Next to architectural gems of Paris, the cathedral of Saint-Denis is considered one of the most beautiful medieval buildings in occidental Europe. First established as an abbatial church in the 7th century, it has been the main French royal necropolis since the 13th century.

Today, it doubles as a museum given its history as one of the most significant places of birth of gothic architecture.

Raised to the status of a cathedral in 1966, the church is one of the most visited monuments in Paris and regularly benefits from improvement plans led by France’s Ministry of Culture.

To commemorate the 50th anniversary of the diocese, the cathedral’s choir was refurbished with a new altar and new ambo. The renovations are the work of artist Vladimir Zbynovsky. He designed an ambo and a stone altar holding a glass block, which transmits light throughout the church and into the depths of the crypt.

The glass slabs that comprise the ambo and the altar were provided by Corning Specialty Glass, which produces such material in its Bagneaux facility. These massive pieces of glass – 1,400 kg for the altar & 400 kg for the ambo – complement the surface of the stones.

“It is a real technical challenge that our Bagneaux facilities delivered,” said Philippe Engel, Commercial Manager of Business Development for Corning Specialty Glass. “There are very few glass manufacturing sites in the world that can produce such large slabs, but Corning’s Bagneaux plant is one of them.” 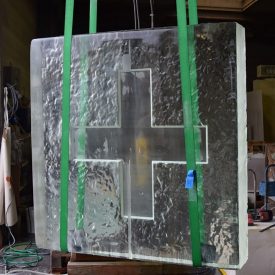 ​The Corning Specialty Glass plant in Bagneaux sur Loing created two glass slabs, one weighing more than 3,000 pounds and the other almost 900 pounds, for the French cathedral.

The second challenge was to engrave the exact roughness of the stone in the glass to enable the glass to fit perfectly on the stone. The SNBR company, with the support of Corning’s European Technology Center, scanned the relief of the stone using 3-D digitization and glass machining.

Finally, the glass blocks were polished by Sovis, which is a 100% Saint-Gobain subsidiary, and installed inside the Cathedral.

The inaugural event was held on February 7th.

“By participating in this master project, the Corning Bagneaux facility is demonstrating its ability to meet ambitious technological challenges,” said Pierre-Jean Baron, General Manager of Corning Specialty Glass. “It is also a sign of our long-standing support for the global community of glass artists.”