Human Liver Spheroids and Ready-Made Kits: The Next Frontier for 3D Disease Modeling

The Next Frontier in Disease Modeling: Human Liver Spheroids and Ready-Made Kits

Generally, drugs in clinical development have a slim chance of approval.

Between 2006 and 2015, less than 10 percent of drugs in clinical development received marketing authorization, according to Frontiers in Pharmacology. But even when drugs advance, there's always the risk that they'll lose approval in the post-marketing phase. When that happens, it's often due to hepatotoxicity.

"The correlation between animal tests and human clinical outcomes is 50 to 60 percent," said Feng Li, Ph.D., a development associate at Corning Life Sciences. "It's maybe slightly better than flipping a coin, which is not great for predicting liver liability for any new drug candidate. It's a very well-acknowledged problem by pharmaceutical companies and regulatory agencies."

Drug-induced liver injury remains a leading cause of drug attrition, post-marketing withdrawal and warning label and has led to tragic consequences. Consider Fialuridine: The Hepatitis B drug passed preclinical animal studies in the early 1990s and showed no evidence of drug-induced liver injury — until it reached human trials, Li says.

In one trial, as chronicled by a review in the National Academies Press, seven patients in a National Institutes of Health trial developed severe liver toxicity. Five died, and two more survived only after liver transplants.

Fialuridine isn't the only drug to be withdrawn. Troglitazone and TAK-875, both investigational treatments for Type 2 diabetes, similarly failed in human trials.* 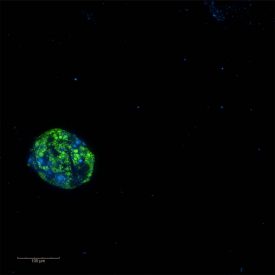 These examples — and other nonalcoholic steatohepatitis clinical trial failures, as summarized in Expert Opinion on Investigational Drugs — reinforce the need for physiologically and pathologically relevant preclinical liver models.**

It would make sense that if the drugs are to be used in humans, the testing models should be human, too.

Because 3D cell cultures better mimic in vivo liver biology, researchers are turning to spheroids made with primary human hepatocytes to more accurately predict liver response. These approaches avoid the ethical quandaries of animal research models, and they also have the distinct advantage of being a 3D model. Whereas primary human hepatocytes tend to die in a week or so in 2D cultures, 3D structures, such as spheroids, enable long-term study of liver toxicity.

Spheroids also come with cost and efficiency benefits. They can be developed inexpensively, compared to primate models and new technologies like organ-on-a-chip platforms. And because they can be grown at scale within days, spheroids support high-throughput screening.

Still, spheroid technology won't replace animal models entirely, at least not while they're being validated. Every preclinical approach has a purpose, and the usage of one over another depends on endpoint goals.

"People are definitely realizing the beneficial features of advanced 3D models [like spheroids], and they're well aware of the shortcomings of animal tests," says Rongjun Zuo, Ph.D., a technology program manager at Corning Life Sciences. "But the question is at what specific stage these models can bring the most value."

That's the big question — and there's no clear answer yet. Indications point to spheroid models having the most significant impact in the early stages of drug discovery, which leans on high-throughput screening for pretrial drug candidates. As projects advance toward more detailed investigations, high-cost, high-complexity methods like liver-on-a-chip platforms might yield deeper insights.

Studies have to make it to that point first, though, and many don't. That makes 3D technologies like spheroids an especially appealing option for labs that want easy and low-cost assays that will minimize investment losses when drug candidates fail. And these days, ready-made spheroids like the Corning® HepGo™ kit are taking those quick-start projects to a new level. 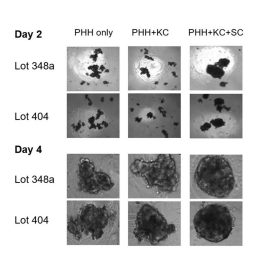 The Advantages of Pre-Made Assays

Despite spheroids' many upsides, there are barriers to wholesale adoption. For one, not all human liver cells are compatible with spheroid formation. Researchers either have to buy prequalified hepatocytes or pretest the cells to ensure that they'll work. And that takes time.

It also takes time to gather the proper testing, infrastructure, skill sets, supplies, media, and protocols to reliably form the spheroids with minimal variation. That could take months, Li says.

You could do all this work in-house, or you could buy an assay-ready kit. As a plug-and-play solution, a HepGo™ kit has 96 pre-plated spheroids ready for imaging-based and biochemical testing. The assays can also be done on the same microplate without transferring the cultures, which reduces time and contamination risk.

"With this assay-ready format, you can do a very quick test to see if this model is useful for you without worrying about the consistency of the product," Li said. "We take care of this part, and the customers just have to focus on what they want to do with their drug discovery or development effort."

Not only do researchers get ready-made assays, but they also get the benefit of consultation and technical support from Corning. That kind of collaboration stands to make new 3D models more accessible to more researchers — which could help more drugs get tested in human liver cells before humans take them. These innovative new models could make all the difference in the years to come.

*Troglitazone was already in the market and FDA requested its withdrawal due to severe liver injury found in patients. TAK-875 clinical trial was terminated during its clinical trial.