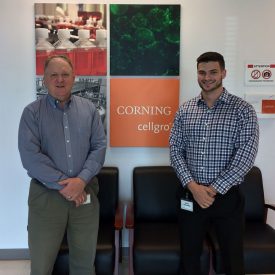 When J.R. Powell assumed the role of plant engineering manager at the Corning Life Sciences Manassas facility in Virginia in 2014, he took note of the plant's water consumption as an area of opportunity.

Powell worked to introduce a water-reduction plan and recruited the facility's engineering and Global Energy Management (GEM) teams to help with implementation. Three years later, the teams' efforts have reduced the Manassas plant's annual water consumption by approximately 5 million gallons, or enough water to supply about 161 households in the United States for an entire year.

"The efforts that we started were really supporting Corning's environmental stewardship," said Powell. "The cost savings achieved are more secondary than a primary benefit of the efforts."

Across the globe, GEM teams in Corning's plants work to reduce water consumption by a certain goal each year. The efforts at Manassas catapult its water savings far beyond that goal. Powell and Shane deNoyelles, a process engineer at Manassas whose work contributed to the water savings, identified the top three water-saving projects completed by the team within the past three years:

3)      Improved cooling controls and other uses

While working on implementation of these and several smaller-scale projects, the team also ensured that employees across the facility learned about water use and the big impacts made by being more environmentally mindful.

"Awareness is an important aspect," said Powell. "Making people aware of the consumption goes a long way in helping drive these improvements that you can't really put your hands on. This is just one example of how we demonstrate that we, as Corning, can contribute to the company's overall environmental initiatives."