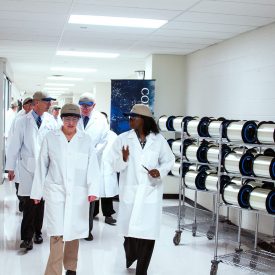 The EPA's Betsy Dutrow enjoys her first-ever tour in a Corning facility.

The ENERGY STAR Challenge for Industry is a global call-to-action for manufacturing sites to reduce energy intensity, or the amount of energy used to make a product, by 10 percent within five years. Corning's fiber plant in Concord, one of eight Corning sites to become a Challenge for Industry Achiever, reduced its energy intensity by more than 10 percent within two years.

As part of the showcase, the facility’s site energy team members through Global Energy Management (GEM) hosted a poster session highlighting individual projects like LED lighting, manufacturing process improvements, and compressed air leak detection, all of which contributed to achieving the Challenge for Industry. The plant’s manager hosted the formal program, which included remarks from ENERGY STAR, Duke Energy, and division leadership. A tour of the facility followed.

"We have gathered today to celebrate and showcase a perfect example of pollution prevention here at Corning's Concord Manufacturing Plant," Betsy Dutrow, director of Industrial Partnerships, ENERGY STAR, said to the audience of more than 50 people. "The Concord plant is part of Corning's broad Global Energy Management program and the acronym 'GEM' is used to describe that program. I think it's a very apt acronym. It is a gem for Corning. And that program has done tremendous amounts of work, and we're so proud to be associated with Corning and the work that you do."

"This plant particularly has done extraordinary work in demonstrating, as we always like to do, beating the target by two years and doing 150 percent of what the target was," Kinlin said.

ENERGY STAR is now using Corning's Challenge for Industry Showcases as models for what other companies can do to celebrate the achievement.