Be the Ally: How to Support Anti-Racism in the Lab | Five Actions You Can Take Today | Corning

Be the Ally: How to Support Anti-Racism in the Lab

Systemic racism permeates every aspect of our lives—and, as people of color who work in science can attest, the lab is no exception.

Researchers have been saying so for years, but it wasn't until 2020 when those individual voices coalesced into a national anti-racism movement. On June 10 of 2020, spurred by the recent killings of Black Americans, thousands of scientists left the laboratory and hundreds of universities and laboratories closed down for the day to advocate for racial equity and oppose racism in the STEM fields as part of the #ShutDownSTEM and #ShutDownAcademia initiative. They used the hashtags on social media to amplify their message of eradicating anti-Black racism.

That national discourse has continued—as well it should have, says Dana Moss, chief diversity, equity and inclusion officer at Corning.  As the leader of Corning's Office of Racial Equality and Social Unity’s internally focused efforts, Moss sees the dialogue as one that doesn't just support individual scientists, but science as a whole.

"There's always value in diversity, in terms of innovation and diversity of thought in STEM fields," she said. "But when contributions of diverse scientists are overlooked, it hampers research. It holds back breakthroughs."

Indeed, racial reckoning calls for uncomfortable conversations and difficult introspection, the Wharton School of the University of Pennsylvania says. But before anyone can be anti-racist, they have to understand the pernicious effects of bias in STEM research.

It starts with listening—and continues with action.

"... when contributions of diverse scientists are overlooked, it hampers research. It holds back breakthroughs." 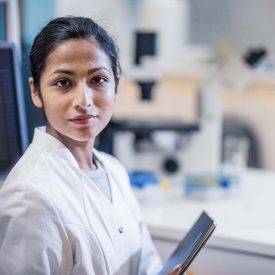 5 Actions You Can Take Today

Whatever your role in the lab, you can take steps to be a better ally. Most of the time, these are everyday opportunities to advocate for and learn from marginalized communities.

1. Amplify the voices of marginalized people.

It's one thing to listen to others when they speak. But to be true advocates for racial equity, scientists also have to listen to what isn't said—and who isn't saying it.

"You should actively invite the input from your colleagues and give everyone a chance to speak," said Odessa Petzold, Ph.D., business technology director for the Advanced Optics business at Corning. "While in meetings be alert to the voices you haven't heard and invite them into the conversation, speak up for those whose ideas are being dismissed or overlooked.  Without giving them a platform, we are minimizing diversity and we lose the benefit of different perspectives, ideas, and experiences."

Still, public speaking isn't the only way to solicit and support unheard points of view, nor is it always the best. Some people might be naturally quiet or reserved, but that doesn't mean they shouldn't have the opportunity to contribute and to be heard. Touching base after large meetings or advocating for smaller group chats can be effective ways to help those employees share their insights in more comfortable or more familiar formats.

2. Celebrate the achievements of your peers.

There's a misnomer that runs rampant in the research community that achievements in science speak for themselves. True, published or presented research can stand on its own, but it must also be read, shared, and recognized by others.

"And there must be a path for that to happen," Petzold said. "It's human behavior to promote the accomplishments of people you know and those who look like you.  However, we need to be conscious of this bias and be purposeful in promoting the contributions of everyone—from the concept proposal to article submission and peer-review to when papers get shared around the team. There's a loss that the scientific enterprise pays when the contributions of diverse scientists are being overlooked and a significant benefit realized when we recognize and celebrate the contributions of all our colleagues."

3. Address implicit bias and discrimination when you see it.

Prejudices can shapeshift, and they aren't always overt. Most people know to report blatant discrimination to human resources, but it's the less visible acts that can be the most malign. Even brief microaggressions—such as assuming someone did or didn't have exposure to certain lab technologies, based on their education—can create a hostile environment.

Moss says implicit bias—which Scientific American says is the tendency for stereotype-confirming thoughts to pass spontaneously through our minds— can manifest across the spectrum of scientific careers. One sustaining form of discrimination, she notes, has been about the perceived prestige of certain undergraduate and graduate programs.

"I've seen instances, especially in a post-doc environment, where a person's background, institution, or individuals they studied under influenced their recognition or credibility," Moss said. "Even unintentionally, peers may assume what a scientist has or hasn't done by virtue of what college or university they studied at."

Shedding those kinds of preconceived notions takes effort and intention, and it means assessing your own privileges, biases, and assumptions. Harvard's Project Implicit exercise can help you start exploring how prejudices might be unconsciously influencing your beliefs and behaviors.

4. Seek out opportunities to mentor and be mentored.

Mentorships are indispensable; they help people feel included, supported, and heard as they navigate their careers. But they're also important to fostering diverse relationships and collaboration. Regardless of their age or stage of career, anyone can benefit from mentors from diverse backgrounds and with variegated life experiences. Likewise, scientists can benefit from mentoring people who don't look like them or share the same experiences or approach to solving problems.

Petzold says that Corning's buddy program was important in helping her get started at the company. And even though her buddy has since retired, they're still friends.

"My buddy became one of my informal coaches," Petzold said, "He shared his network to help me navigate the responsibilities of my new role in Corning and encouraged me to explore early opportunities that set me on a path to realizing some of my career aspirations."

"Imagine how much more and how much faster we could advance innovations if we acknowledged all contributions and ensured that all voices were heard."

You don't need to be a decisionmaker to advocate for a more diverse workforce. If you look around the lab and realize that the environment isn't reflective of what it could or should be, speak up. Encourage managers to be more inclusive in their hiring process, and to build retention programs and initiatives that create a sense of belonging—then volunteer to take part in them.

"It's about making sure that people of all forms of diversity feel like they're valued, respected, welcomed, and that they can continue to grow and thrive," Moss said. She added that Corning created its own dialogue and discussion platform with Intersections, an internal site that shares resources designed to help Corning employees overcome implicit bias, address discrimination, and build cultural awareness.

"A key part of our strategy is educating employees about racial and diversity topics and providing a vehicle for all of us to engage with each other in important conversations," she said. "Intersections is an essential enabler of that strategy."

"If we don't listen to all scientists, engineers, and others who function in the scientific enterprise, we miss a large percentage of people, and a large percentage of possibilities," Petzold said. "Imagine how much more and how much faster we could advance innovations if we acknowledged all contributions and ensured that all voices were heard."