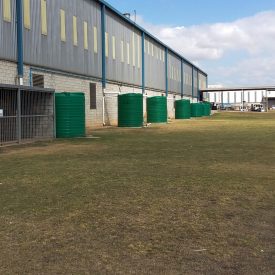 Rainwater collected from the South Africa plant's 10 tanks (green objects in photo) is used in production, cleaning, and gardening.

Drought conditions and water restrictions normally lead to brown and unhealthy vegetation. At Corning's Environmental Technologies facility in Port Elizabeth, gardens have maintained their lush green and cleaning processes that use large amounts of water continue, thanks to an abundance of recycled rainwater.

In summer 2014, the Port Elizabeth site energy team with Global Energy Management (GEM) installed five tanks capable of capturing 10,000 liters (about 2,640 U.S. gallons) of rainwater at the end of the downspouts at the base of the building. Reverse osmosis (RO) units, which purify the plant's water, typically create a wasted byproduct of about 30 to 60 percent when using municipal water. With rainwater, because it is purer, the plant reduced that waste to 20 to 30 percent.

"In 2014 we started harvesting rainwater to service our RO plant for production," said Peter, the plant’s site energy manager. "Since then we have installed a total of 10 tanks holding 10,000 liters of rainwater each for our RO plant and two tanks for our floor scrubbing and general cleaning and gardening."

The 10 tanks top off at 24,610 gallons, an amount roughly equivalent to 352 bathtubs full of water, or 1,448 showers. Of the nearly 25,000 gallons, the facility uses a portion for plant production purposes and uses approximately 2,000 gallons per month on cleaning and gardening.

"The only water we use from the main municipal supply at present is for ablutions and the kitchen until we run out of rainwater when we have drought periods, which happens around twice a year," Peter said.

Overall, Peter reported that the monthly water usage from the main municipal supply has decreased by 8,000 gallons per month since 2014, and an issue with algae collection has been addressed by continuously circulating the water between tanks.

"At present we are experiencing a drought, and there are water restrictions in place," Peter said, but his outlook remains optimistic, thanks to the collection system. "Due to our tanks being full, this will not affect us for at least the next six months."