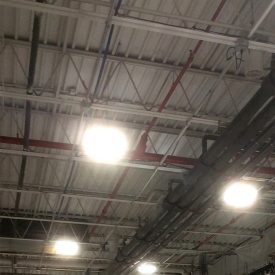 LED fixtures provide better lighting on the Kennebunk CLS plant's manufacturing floors while saving energy for both the facility and the company.

Together, the plant’s efforts are saving Corning approximately 1,280,000 kilowatt hours annually, enough energy to power about 120 homes in the U.S. for an entire year.

According ENERGY STAR, LEDs, or light-emitting Energy diodes, use a fraction of the energy of other bulbs, emit less heat, and are more durable. In addition, LED bulbs are directional bulbs, meaning they emit light and heat in a specific direction, leading to vast energy savings.

Several other Corning facilities have made commitments, and are well on their ways to becoming 100 percent LED.