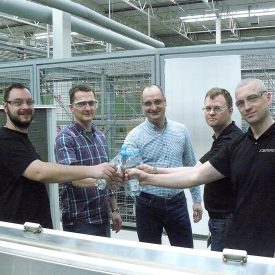 Daily monitoring and changes to its water system has led to significant water savings for Corning Incorporated’s Connectivity Solutions plant in Strykow, Poland.

The major contribution to the achievement was eliminating water loss sources, said Mariusz Swedziol, Site Energy Manager. Previously, the water system on a few machines worked on an open-loop system, which cycled water through the machine once before draining. The system was changed to a closed-loop system, which treats water, allowing it to cycle through the machine many times. The project contributed a water savings of more than 8.5 million per year, according to Bob Korich, Division Energy Manager.

After installing the closed-loop system, the team began to manually monitor its water meters. According to Swedziol, watching those meters daily led to identifying a few problem areas.

The team installed several additional water meters at a low cost to monitor usage on a real-time basisc. Instead of having to manually check the meters, plant leaders now receive updates and alerts on water usage, should problems arise on the system. This has allowed the team to quickly identify areas of the plant using more water than normal, and fix the problem, sometimes in the same day.

Mariusz said achievements from the “Waterworld” project include: