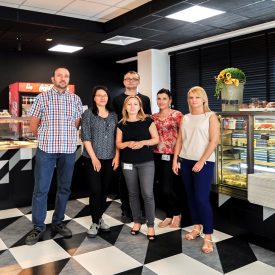 The bright, updated canteen has been a big hit with employees in Strykow.

A new modern canteen that opened in 2016 in the Optical Communications plant in Strykow, Poland is getting five stars from employees for its healthier food choices and more comfortable furniture, and key environmental improvements were just as critical during the six-month renovation project, plant officials said.

"The original canteen had been in service for many years and needed to be refreshed," the plant manager said. "We used the renovation work as an opportunity to promote healthy food and go environmentally greener." The plant, which has about 2,000 employees, produces fiber optic cables and optical connectivity hardware and equipment. It is the largest Corning site in EMEA.

According to the project leader, employees were thrilled to see the new canteen when it reopened one month after renovations began.   Employees are now offered a wider variety of healthy meal choices that are prepared on-site.

According to the project leader, two of the biggest environmental improvements were in waste management and disposal. First, the kitchen stopped using plastic plates and plastic utensils in favor of washable plates and utensils, reducing the amount of waste sent to the landfill. Second, employees were asked to better separate their meal waste by sorting it in different recycling containers for items such as plastic, glass, aluminum, and municipal waste.

"Sending less waste to the landfill was most important to us," said one employee. "We wanted to make a positive impact on the environment."

According to the Corning personnel, the new kitchen equipment was an important investment. "We are now using an energy- and water-saving dishwasher and a new stove.  By eliminating plastic dishes, we reduced approximately 10 percent of our municipal waste."

The plant's landfill diversion rate is approximately 96 percent overall.   Most of what goes to the landfill now is office waste and wet paper towels, and they may replace the paper towels in the bathrooms with more efficient hot-air hand dryers to reduce that waste stream. Plant officials are also considering sending the plant's municipal waste for energy recovery instead of sending it to the landfill.

This has resulted in zero controllable environmental incidents for many years, and Polish environmental authorities gave the plant a 'zero non-compliance' statement last year after an intensive audit, according to Corporate Environmental Control (CEC).  When CEC discusses environmental improvement opportunities in Strykow, it is never a discussion about the 'if' but a constructive discussion about how to achieve it in the most effective way.